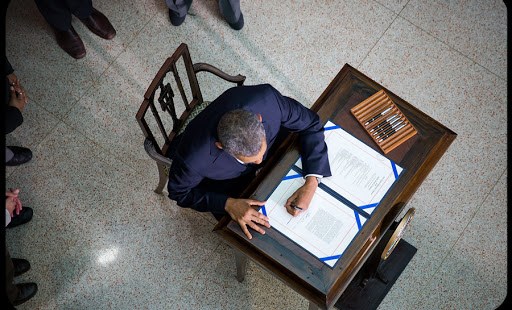 No exemptions for conscience are to be allowed.

Satan is brilliant at tactics. He breezes to short term victories that make him appear invincible. But for every Pearl Harbor he inflicts on the Church, there is a longer, deeper, countermove that guarantees his defeat. That’s how I’m reading the latest attempt by the Obama administration to force Christian churches to accept homosexual behavior as normal and good.

Obama has ignored the pleas of even his pals on the “religious left” — those who were willing to collaborate with the most pro-abortion president in history — and refused to exempt their churches from his latest diktat: An executive order that denies federal contracts to any group that’s unwilling to hire openly gay employees. With the stroke of a pen, like Louis XIV’s decision to persecute the Huguenots, Obama has put the entire force of the $3.77 trillion dollar federal budget behind the effort of cultural elites to impose their secular mores on the whole American people, using their own tax money against them.

You can learn more about the ever-more-ambitious, pro-gay agenda, which will entail the persecution of churches if it’s not stopped, in Robert Reilly’s latest courageous book, Making Gay Okay: How Rationalizing Homosexual Behavior Is Changing Everything — a book so truthful and important that almost no one has the nerve to review it. Go buy it today. In ten years, such books might be illegal.

The short term impact of this on faithful Christians will certainly be unpleasant. Let’s assume that the leaders of the major Christian communions (Catholic, Orthodox and Evangelical) stand on principle.  Churches and charities that won’t collaborate will lose billions of dollars in federal funds that they had previously dispensed, channeling taxpayer money to serve the poor, recent immigrants, and others eligible for federal poverty aid. Groups such as Catholic Charities, some bishops’ migration offices, and others will see their budgets slashed. They will have to scale back their services, as the needy whom they had served get their needs met somewhere else — by church groups which decide to play Judas, or outright secular agencies. The Christian groups that had relied on federal money to carry out their missions will have to look to their own church members for more donations, or their impact and clout will diminish.

There is no prospect of people going hungry, or being deported unjustly; the federal money that has been allocated to serve the poor will still be out there — but it will be sluiced through different channels. Any given church that holds fast to traditional teaching, if it wants to feed the poor or engage in community organizing, will have to use its own (tax-exempt) money to do so.

Groups like Catholic Charities will have to draw closer to the Church and look to the laity for donations.  The laity, in turn, will have to step up, giving as they never have before.

Would that be the worst thing in the world? As I read the Church’s teaching on subsidiarity, any given problem ought first to be addressed by individuals and families, then private groups such as churches, and only if it cannot be solved that way referred to the government — the local government. If the locals fail to solve it, then the state government ought to get involved. Only problems that literally cannot be solved by local governments should be referred to Uncle Sam.

That crucial piece of Catholic social teaching, which Pius XI unfurled like a battle flag in the face of fascist and communist tyrannies, is flouted when the federal government becomes the first resort for every needy person. It’s corrupted when the units of civil society such as the churches become just one more another interest group feeding from the government trough.  Critics of bishops’ statements on immigration have had a field day with the fact that Catholic agencies receive tens of millions of dollars from the federal government for their immigration ministries — questioning whether this gives clerics a direct financial incentive to increase the number of migrants to America.

Can a Christian organization really stay true to its mission when it depends for much of its funding on a government whose morality can hardly be distinguished from that of Kermit Gosnell? Isn’t it much more likely that the lure of government money will serve as a constant force to secularize that mission?

Christopher Hitchens was appalled that Mother Teresa took money from Baby Doc Duvalier. But at least it came without strings; Duvalier’s thugs weren’t supervising the Missionaries of Charity, making sure that all their ministries served his government’s agenda. But that is precisely what happens to a religious agency that takes on a government contract. Every dollar of government money must (rightly) be spent on secular purposes.

As we see with Obama’s latest order, the purposes of this secular government are increasingly incompatible with the Christian view of man, or any notion of virtue that our Founders would have recognized. As I wrote in a piece on the bruited Black Mass at Harvard:

Our country has gradually shifted from an intolerant (ca. 1688) to a tolerant (ca. 1783) Protestant culture, to a broadly religious humanism (ca. 1945), to embrace after 1968 a new and crasser creed. The lowest common denominator on which we can all agree boils down to this: suffering is worse than being happy, and being alive is better than being dead — except if it means that you will suffer.
That is the sum total of what Americans can agree on, the fighting creed of the free world for which we expect our soldiers to march off and die. The triumph of this new religion is everywhere apparent, and it’s the only rational way to explain to your grandmother how it is that gay marriage is now legal in most places where cigarette smoking isn’t, and why states that shrug at sadistic pornography grimly insist upon seat belts.
The God of the Happy Moments is a jealous god, and his zealots are proving to be bigots.

Secular liberals are no longer willing to collaborate with the churches on humanitarian missions, and agree to disagree about the rest. This widely applauded executive order makes that perfectly clear: liberals are now openly intolerant of orthodox Christianity, and they plan to keep on tightening the screws.

We can only be true to our faith when we use our own time and talents, when we spend our own money, to promote the distinctly Christian vision of human flourishing — which is increasingly incompatible with what liberals consider “decent.”

So by cutting the spigot of federal money to church-based agencies, Obama has done us a paradoxical favor — as Garibaldi unwittingly aided the Church by stealing the Papal States. (Would we really want them back?) However wicked are Obama’s manifest intentions, he is offering us a profound opportunity to rebuild our outreach to the needy along truly Christian lines. We won’t be rubbing shoulders with (and taking orders from) abortionists and euthanasia doctors, or competing for grants with staffers from Planned Parenthood who teach bondage classes to teenagers. We will have to act like our ancestors in the faith, who cobbled together their pennies to build the Catholic school system and cathedrals like St. Patrick’s.

John Zmirak is co-author of the upcoming The Race to Save Our Century.