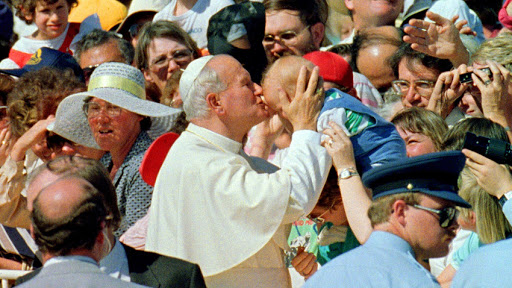 The next Synod would do well to emulate his style, at once clear and deeply moving

I feel the duty to reaffirm strongly that the intrinsic value and personal dignity of every human being do not change, no matter what the concrete circumstances of his or her life. A man, even if seriously ill or disabled in the exercise of his highest functions, is and always will be a man, and he will never become a "vegetable" or an "animal."

Even our brothers and sisters who find themselves in the clinical condition of a "vegetative state" retain their human dignity in all its fullness. The loving gaze of God the Father continues to fall upon them, acknowledging them as his sons and daughters, especially in need of help. (Address, 3)

Public authority must redress the violation of personal and social rights by imposing on the offender an adequate punishment for the crime, as a condition for the offender to regain the exercise of his or her freedom. In this way authority also fulfils the purpose of defending public order and ensuring people’s safety, while at the same time offering the offender an incentive and help to change his or her behaviour and be rehabilitated.

It is clear that, for these purposes to be achieved, the nature and extent of the punishment must be carefully evaluated and decided upon, and ought not go to the extreme of executing the offender except in cases of absolute necessity: in other words, when it would not be possible otherwise to defend society. Today however, as a result of steady improvements in the organization of the penal system, such cases are very rare, if not practically non-existent” (EV, 56).

And imbues the doctrine with an explanation of its origin in God’s merciful punishment of Cain:

God, who is always merciful even when he punishes, "put a mark on Cain, lest any who came upon him should kill him" (Gen 4:15). He thus gave him a distinctive sign, not to condemn him to the hatred of others, but to protect and defend him from those wishing to kill him, even out of a desire to avenge Abel’s death. Not even a murderer loses his personal dignity, and God himself pledges to guarantee this. And it is pre- cisely here that the paradoxical mystery of the merciful justice of God is shown forth. As Saint Ambrose writes: "Once the crime is admitted at the very inception of this sinful act of parricide, then the divine law of God’s mercy should be immediately extended. If punishment is forthwith inflicted on the accused, then men in the exercise of justice would in no way observe patience and moderation, but would straightaway condemn the defendant to punishment. … God drove Cain out of his presence and sent him into exile far away from his native land, so that he passed from a life of human kindness to one which was more akin to the rude existence of a wild beast. God, who preferred the correction rather than the death of a sinner, did not desire that a homicide be punished by the exaction of another act of homicide" (EV, 9).

John Paul never failed to present doctrine in direct, uncompromising language. At the same time, he presented us with poetic images of unborn children at risk of abortion, of women wounded by abortion, of vulnerable persons lacking cognitive ability who are at risk of euthanasia, and of murderers spared by God’s mercy. It is these words and images that put flesh on the bones of doctrine and open a window for us to the heart of Christ.

The Fathers of the 2015 Ordinary Synod would do well to adopt the clear catechetical AND poetic evangelical style seen in Saint John Paul’s writings, Familiaris Consortio, Evangelium Vitae, and the Letter to Families, along with his teaching on the theology of the body.