Sing a Hymn to the New Martyrs 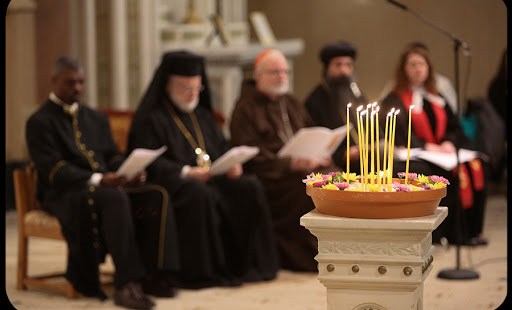 Western churches must celebrate the martyrdom of the victims of ISIS

This past month, the Christian church acquired 21 new martyrs for the faith. To a few, that statement might seem glaringly obvious, but in the wider world of Western churches and institutions, it is startling and controversial. That gulf of understanding points to a crying need to understand and clarify the concept of martyrdom.

To begin with a personal bugbear, let me say what did not happen on that day. The masked thugs of ISIS did not “execute” anyone, and certainly not the 21 Coptic Christians they murdered at the Libyan/Egyptian border. Execution is a term reserved for formal actions grounded in some kind of due process, and ISIS has no status that would allow it to perform such acts. It’s bad enough when the New York Times refers to “execution,” in a sad attempt at objectivity, but must Christian media follow its example?

ISIS selected their victims solely on the grounds of their religion, making no reference to any actions they had committed, to their nationality or social status. As the group declared, frankly enough in their public statement, they “had been chopping off the heads that have been carrying the cross for a long time, and today, we are on the south of Rome, on the land of Islam, Libya, sending another message….. And we will conquer Rome, by Allah’s permission”. Could the religious intent be clearer?

Viewed from the stance of the early church, this was clearly an act of martyrdom, the highest form of sanctity. So esteemed was martyrdom in early times that believers were long reluctant to accord saintly status to those heroic figures who nevertheless failed to die at the hands of unbelievers. Gradually, the status of “confessor” was invented to describe those somewhat lesser figures.

Making the recent martyrdom even more explicit were the motives of the perpetrators. We can argue at length about the exact nature of ISIS. Is it the logical conclusion of Islam and Qur’anic teachings, or is it rather a bizarre modern excrescence of that faith, a death cult that happens to raid Qur’anic teachings at its convenience? Personally, I lean to the latter theory, but it really does not matter. ISIS’s gangsters proclaimed themselves as Islamic soldiers at war with Christianity and the Cross.

Their Egyptian victims did not seek out any part in that war, which was visited upon them unwished, but they died as Christians, entirely and solely for their faith. Some, apparently, muttered the words “Lord Jesus Christ” with their last breath. That indomitable Christian faith has been clearly acknowledged by their own Coptic Church, which has proclaimed them martyrs. Their feast day will be February 15. Pope Francis has also freely used the language of martyrdom in this instance.

Why, then, do most Western churches not likewise speak of martyrdom, particularly those in North America? I suspect it is because they are reluctant to acknowledge the religious aspects of the ongoing struggle. If the Libya victims are martyrs, then they must have perished in a holy struggle, and Christianity must be at war with Islam. But that is a false conclusion, if only because ISIS itself is so very far removed from normative Islam worldwide.

We can understand why governments should try to avoid such conclusions, and the US White House neglected to mention the Christian identity of the victims in its statement of condemnation. But are the churches of North America and Europe really so utterly subservient to state interests as to share such sensitivities? If they are, is that not a terrifying conclusion?

I believe that Western churches should celebrate and hymn the New Martyrs of Libya, and should continue to do so as long as those institutions exist. Those churches also need to think carefully about the place that martyrdom plays in their faith, and just how they lost that concept of ultimate devotion and sacrifice.