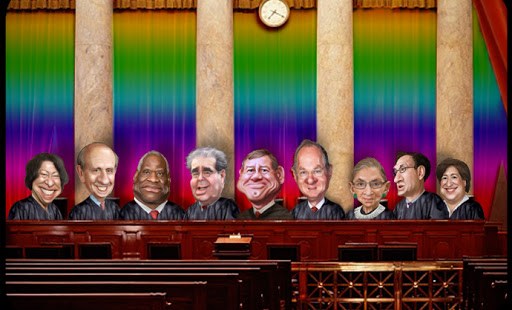 Too bad it’s based on reality

The date is October 3, 2016. The Supreme Court of the United States had issued its landmark decision in favor of same-sex marriage in mid-2015. What shocked the nation more than anything else was the fact that nowhere in the ruling was there a stipulation as to the number of parties actually “marrying.” The Supreme Court seemed satisfied with their ruling and did not expect that the issue would arise again in the future. Little did they know! No one seemed too concerned until October 3, 2016 when Mary, Sally, and Jane showed up at the Courthouse and applied for a marriage license. The clerk was at first confused and checked with his superior who saw no reason under current law to deny Mary, Sally and Jane a marriage license. The three lesbians were married on October 24, three weeks after they had made application.

Things seemed to be going along well. However, there was some jealousy when Sally felt that Mary and Jane were excluding her from many of their passionate lovemaking sessions. At first, it seemed that Sally would “get over it,” but as time went on, Sally became more and more dissatisfied with their living arrangement. Sally filed for divorce in the fall of 2017. Mary and Jane were in shock. They obtained an attorney but their joint attorney advised them both to seek independent legal counsel as there were many issues that could not be easily resolved, at least not under our legal system.

Mary had visited a sperm clinic prior to their marriage and had conceived a son named Noah. Sally too had two children, Peter and Matthew, from a previous marriage that had not worked out. These two children had a legal father but, due to financial reasons, and as part of the divorce, had given up full custody of the children to Sally. Jane was the only person that had entered into their current marriage without children.

The three women had attempted to file a joint return in the spring of 2016, but their return was under audit by the Internal Revenue Service. In their case, the IRS auditor was able to locate their files but was unsure as to whether all three women could claim each other’s children as dependents as there was some confusion as to which one was legally responsible for the other parties’ children. No formal adoption papers had ever been processed. They were legally married according to current law but in the case of Mary the sperm donor had requested to remain anonymous and Sally’s husband had relinquished custody as part of their divorce. To complicate matters, Sally owned the home they were currently living in but now all three women were claiming, as part of their joint tax return, a partial deduction for the ongoing expenses of the home including property taxes and mortgage interest, although only Sally claimed ownership of the property.

Each woman owned her own car and a designated amount of personal property which made the divorce settlement even more complicated. Mary and Sally wanted Jane to pay some amount of child support as part of the divorce as they claimed that Jane entered into the marriage with a full understanding that the other two parties had three children to support. In turn, Jane claimed that she had no children and that she was not responsible for the dependents of the other members of the marriage even though she had filed the joint Federal return claiming that she had contributed to the support of the three children. All three women worked but only Mary and Sally claimed dependents as part of their State and Federal withholding. Jane claimed zero for both State and Federal withholding.

The Divorce Court ruled that all three parties were responsible for the children. Jane appealed. In 2018, the Sixth Circuit Court of Appeals reversed the ruling of the lower court and held that only Mary and Sally were responsible for their dependents as Jane had not been involved in any way in the procreation of the children that Mary and Sally had brought to the marriage. Mary and Sally appealed their case to the Supreme Court. In the Spring of 2019, the Supreme Court agreed to hear the case, which is still pending.

Donald Wittmer contributes to Catholic Journal, and is a husband, father, grandfather, and business executive. This article originally appeared in Catholic Journal and is reprinted here with permission.