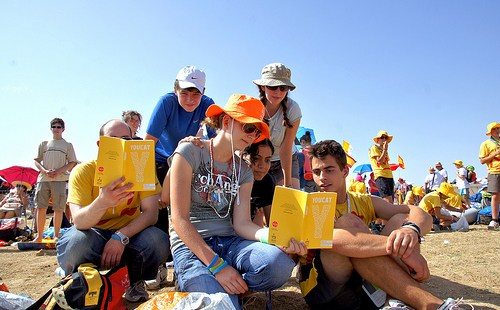 On the occasion of the publication of the new Bible for youth, Pope Francis has written a very personal account of his own relationship with Scripture.

Writing the prologue to the new German edition of the Youcat Bible, which will be published Oct. 21, Pope Francis speaks lovingly of an old, worn-out Bible he has carried around for half his life.

He counsels young people on the best approach to reading the Bible so it brings the Light of the World into their lives and doesn’t end up on a shelf. It is, he reminds readers, a “dangerous” book in certain parts of the world: owning one can lead to jail or torture.

And he quotes Mahatma Gandhi, who said, “You Christians have in your hands a book containing enough dynamite to shatter all civilization.”

Here is the Pope’s prologue:

If you could see my Bible, you would not be particularly impressed. What—that’s the Pope’s Bible? Such an old, worn-out book!

You could buy me a new one for $1,000, but I would not want it. I love my old Bible, which has accompanied me half my life. It has been with me in my times of joy and times of tears. It is my most precious treasure. I live out of it, and I wouldn’t give anything in the world for it.

I really like this new Youth Bible. It’s so colorful, so rich in testimonies: testimonies of the saints, testimonies of young people. It is so inviting that when you start to read at the beginning, you can’t stop until the last page.

And then …? And then it disappears on a shelf, collecting dust. Your children find it one day and bring it to the flea market.

It must not come to that.

I’ll tell you something: There are more persecuted Christians in the world today than in the early days of the Church. And why are they persecuted? They are persecuted because they wear a cross and bear witness to Jesus. They are convicted because they own a Bible. The Bible is therefore a highly dangerous book—so dangerous that you are treated in some countries as if you were hiding hand grenades in your closet.

It was a non-Christian, Mahatma Gandhi, who once said: “You Christians look after a document containing enough dynamite to blow all civilization to pieces, turn the world upside down, and bring peace to a battle-torn planet. But you treat it as though it is nothing more than a piece of literature.”

So what do you have in your hands? A piece of literature? Some nice old stories? Then you would have to say to the many Christians who go to prison or are tortured because they own a Bible: “How foolish you are; it’s just a piece of literature!”

No. By the word of God has Light come into the world, and it will never go out. In Evangelii Gaudium (175) I said, “We do not blindly seek God, or wait for him to speak to us first, for ‘God has already spoken, and there is nothing further that we need to know, which has not been revealed to us.’ Let us receive the sublime treasure of the revealed word.”

So you have something divine in your hands: a book like fire! A book through which God speaks. So notice: The Bible is not meant to be placed on a shelf, but to be in your hands, to read often—every day, both on your own and together with others. You do sports together or go shopping together. Why not read the Bible together as well—two, three, or four of you? In nature, in the woods, on the beach, at night in the glow of a few candles … you will have a great experience!

Or are you afraid of making a fool of yourself in front of others?

Read with attention! Do not stay on the surface as if reading a comic book! Never just skim the Word of God! Ask yourself: “What does this say to my heart? Does God speak through these words to me? Has he touched me in the depths of my longing? What should I do?” Only in this way can the force of the Word of God unfold. Only in this way can it change our lives, making them great and beautiful.

I want to tell you how I read my old Bible. Often I read a little and then put it away and contemplate the Lord. Not that I see the Lord, but he looks at me. He’s there. I let myself look at him. And I feel—this is not sentimentality—I feel deeply the things that the Lord tells me. Sometimes he does not speak. I then feel nothing, only emptiness, emptiness, emptiness…. But I remain patiently, and so I wait, reading and praying. I pray sitting, because it hurts me to kneel. Sometimes I even fall asleep while praying. But it does not matter. I’m like a son with the father, and that is what’s important.

Would you like to make me happy? Read the Bible!