Giving Thanks for the Un-American Apple 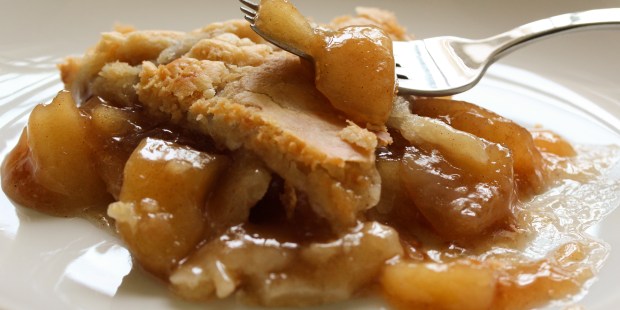 Plus three simple recipes for your Thanksgiving table

You’d be hard-pressed to find a person living in the English-speaking world who hasn’t heard the phrase “as American as apple pie.” And while it’s true that Americans love their pie, it’s the fruit that fills it which has become synonymous with the land of the free.

There’s just one little problem, though. Apples aren’t native to American soil; they’re an immigrant fruit, like the Europeans who brought them. And they were not native to western Europe, either. The apple finds it origins in the area of modern-day Kazakhstan and Uzbekistan, where explorers and warriors traveled trade routes like the Silk Road. Alexander the Great wrote of “dwarfed apples” in the region of Kazakhstan and brought them back to cultivate in Macedonia.

It was the Romans, though, who actually popularized the apple because they were masters of grafting—a technique where a section of a tree is taken, with its buds, and inserted into the stock of another tree. Grafting, according to Smithsonian magazine, is an integral part of cultivating apples (as well as grapes and fruit trees), because the seed of an apple is basically “a botanic roulette wheel,” which means that “the seed a red delicious apple will produce an apple tree, but those apples won’t be red delicious; at most, they’ll only barely resemble [it] …” This intense genetic variability means that fruit grown from apple seed will usually be inedible.

American colonists soon discovered this for themselves when they brought apple seeds and grafted trees from the Old World. The new soil wasn’t as cooperative and the grafting trees did poorly (plus the technique required skill and attention). The seedling plants fared better but produced small, sour apples, similar to a crab apple.

Which brings us to the legend of Johnny Appleseed, whose real name was John Chapman. Historical sources confirm that he mainly cultivated crabapples for use in hard cider, a beverage that, in rural areas, often replaced tea, coffee, and even water, which could be riddled with dangerous bacteria. Chapman was an adventurous, nature-loving entrepreneur of sorts who forged ahead of settlers, cultivating apple orchards and selling them to settlers as they expanded and settled westward.

Most of the fruit from all of the early orchards were used for preserving, mainly for hard cider. Mildly alcoholic, the drink was considered a more patriotic beverage than wine or beer. Cornell University reports that many adults drank up to a gallon a day. (The Temperance movement is to blame for the the fact that today apple cider only brings to mind “juice” in the mind of Americans, though small batch hard ciders are making a come back.)

As settlers continued westward, the apple went with them. The trees were especially happy in Washington State, where the Red Delicious apple flourished and became America’s most popular. Eventually there were scads of varieties growing around the country. In 1905, The Apples of New York published a list of hundreds of varieties in that state alone, with full descriptions and illustrations. Although industrialized agriculture and marketing have significantly shrunk the number of apple varieties grown today, small growers and farms are trying to preserve heirloom varieties—which are known for their far superior flavors.

Whatever apple you enjoy best, the fruit typically makes its grandest appearance at this time of year, especially on Thanksgiving. Apples are in season in the mid-to-late fall in many states and they’re a highly versatile fruit—used in both savory and sweet dishes, as well as in beverages. If you’re still looking for some simple and delicious recipes to serve at your Thanksgiving gathering this week, here are three suggestions. And as you give thanks for your blessings, you might regale your guests with the story of how the foreign-born apple eventually came to be as American as … well … apple pie.

Adapted from Well Fed by my friend Theresa Carver Hudson

If you have a food mill, leave the skins, seeds and stems on the apples—it  gives the applesauce a pink color and deepens the flavor. Once processed through the mill, all the seeds and skins will be removed. (This also eliminates the tedious task of peeling so many apples.) If you don’t have a mill, peel and core the apples first and mash the sauce by hand with a potato masher or in a food processor. If preferred you can use ground cardamom, but I recommend taking the time to grind your own as cardamom loses some of its intense flavor as it sits on the shelf.

Directions: Preheat the oven to 425 degrees. Cut the apples into quarters and set aside. Slice the cardamom pods open with a sharp knife and pick out the little seeds inside. Place them into a mortar and grind them until medium ground. (You don’t want them too chunky, or ground into a fine powder … something in the middle would be perfect.) Add the ground cardamom seeds to the baking pan along with the water, sea salt, brown sugar, sugar, and cinnamon. Stir with a wooden spoon or whisk to combine. Add the apples and toss well. Roast for 40 minutes, or until tender and beginning to caramelize. Remove from oven and set aside to cool slightly. Process through the food mill and serve right away (warm), or store in an airtight container, refrigerated, for up to a week.

This version comes from my friend Susannah Brown Pierce

Directions: Preheat oven to 360F. Place the cored apples in a buttered baking dish. Put some raisins into the apple holes (if you’re using them), then sprinkle cinnamon inside (as well as other optional spices). Add a small sprinkling of granulated gelatin inside, too. (It has no flavor, adds nutrition, and has the happy effect of making the apples more syrupy.) Stuff as much butter inside the holes as will fit. Sprinkle more spices on the top. You can add a couple of tablespoons of butter into the dish to increase the liquid as well, but it’s not necessary. Bake for 1 hour, or until the skins burst and are soft. Serve in a bowl with vanilla ice cream, whipped cream, or all by itself.

As a guest, what’s better than to be handed a delicious cocktail when you arrive for Thanksgiving dinner? Here’s how to make a  bubbly Apple Cider Mimosa (from Delish):