Easter and the Little Child Who Led Us 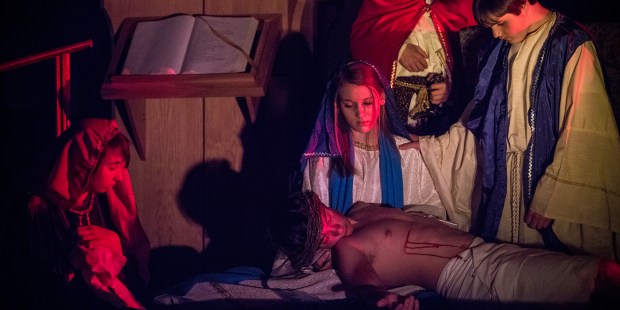 Never before had the Easter message meant so much to me.

About a month ago my son’s Sunday school teacher went to the director of religious education with a concern. She wanted Tommy to be in the stations of the cross play but didn’t know how to accommodate him.

Tommy is autistic. He struggles to communicate and be social. Even worse, he has terrible stage fright.

The DRE emailed me about the issue, wanting to know if we desired that Tommy simply sit out during the play, or if we wanted them to “dream up” a part for him.  We all knew it wouldn’t be a speaking role.

It has always been my policy as a mother of an autistic child to push Tommy a bit.  Of course, I didn’t want him left out. I wanted him in the theatrical experience designed for the whole fifth grade.

So they came up with a great idea — a step up from merely moving the set around and a step down from one of the speaking roles. Tommy would hold cue cards for the audience, indicating to the congregation that we were supposed to participate, and when and what to say.

This certainly wasn’t a huge role; Tommy’s friend Matt had gotten the role of Jesus.

When I found this out, I thought it was fitting for Matt to play Jesus. For years, Matt was the only child at Sunday school who would speak to Tommy; Matt would always say hello.

The morning of the play came, and first grade through fourth grade filed in.  My husband, my mother and I took our seats on the folding chairs in the back of the gym.

The actors were dressed up in minimalist costumes. The women and Jesus’ mother were adorned with long head scarves. The soldiers wore red sashes around their waists and carried plastic swords.  Jesus (Matt) was dressed in a white robe — an altar boy outfit.  He was holding a makeshift crown of thorns.

The play began, and when the action started, I found myself weeping uncontrollably.

People who know me likely thought I was crying because my son was fitting in and participating with the rest of the children. There he was, holding a sign.

But that isn’t why I was so broken up.  A dramatic play about the death and resurrection of Jesus portrayed by 11-year-olds simply got to me. It was, in a word, beautiful. They were so innocent, but so serious, as they took part in the holiest drama of human history.

Tommy’s sign said, “Because by your Holy Cross, you have redeemed the world.”

The other side said, “Jesus, teach me to follow you.”