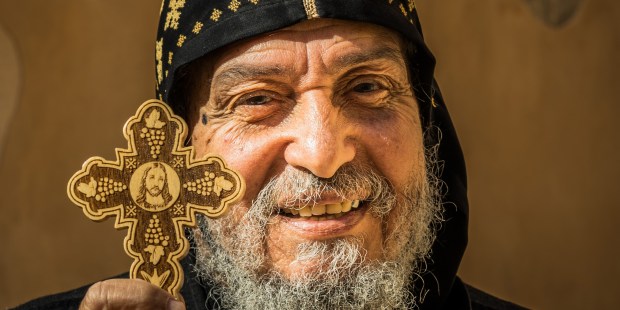 Mark Fischer CC
A Coptic monk in the Monastery of Saint Bishoy, the most famous Coptic Orthodox monastery in Egypt. It is located in Wadi El Natrun (the Nitrian Desert), about 100km north and west of Cairo, Egypt. The monastery was founded by Saint Bishoy in the fourth century AD and is surrounded by a keep, which was built in the fifth century AD to protect the monastery against the attacks of the Berbers. (Thanks, Wikipedia)
Share
Print
John Burger | May 11, 2016

Coptic Christians are the spiritual children of those in the Church who separated in the fourth century, taking a different view of the nature of Christ. As such, they are classified as Oriental Orthodox, as opposed to Eastern Orthodox, and the relationship between Rome and Alexandria has been turbulent at times over the centuries.

But today, both blood and water give Copts and Catholics reason for solidarity: the water of Baptism and the blood of martyrdom.

On Tuesday, Pope Francis wrote to the leader of the Coptic Church, Pope Tawadros II, celebrating the fact that “after centuries of silence, misunderstanding and even hostility, Catholics and Copts increasingly are encountering one another, entering into dialogue, and cooperating together in proclaiming the Gospel and serving humanity.”

The letter was occasioned by the 43rd anniversary of the first encounter between Pope Paul VI and Coptic Orthodox Pope Shenouda III, an annual observance that has come to be known as the Day of Friendship between Copts and Catholics.

The relationship has certainly become more important in the past few years, as militant Islamism throughout the Middle East has threatened Christian communities. Even before the Islamic State group burst onto the international stage, Coptic churches throughout Egypt had been subject to attacks. But the dramatic images of ISIS militants leading 21 orange-clad Copts along a beach in Libya and then beheading them surely prompted Francis to write that he thinks and prays for the Christian communities in Egypt and the Middle East every day.

“So many [Middle East Christians] are experiencing great hardship and tragic situations,” the Pope wrote. “I am well aware of your grave concern for the situation in the Middle East, especially in Iraq and Syria, where our Christian brothers and sisters and other religious communities are facing daily trials. May God our Father grant peace and consolation to all those who suffer, and inspire the international community to respond wisely and justly to such unprecedented violence.”

Noting the ongoing efforts of an international dialogue between Catholics and Oriental Orthodox, Pope Francis said the two Churches are “able even now to make visible the communion uniting us.”

“Copts and Catholics can witness together to important values such as the holiness and dignity of every human life, the sanctity of marriage and family life, and respect for the creation entrusted to us by God,” Francis wrote. “In the face of many contemporary challenges, Copts and Catholics are called to offer a common response founded upon the Gospel. As we continue our earthly pilgrimage, if we learn to bear each other’s burdens and to exchange the rich patrimony of our respective traditions, then we will see more clearly that what unites us is greater than what divides us.

“In this renewed spirit of friendship, the Lord helps us to see that the bond uniting us is born of the same call and mission we received from the Father on the day of our baptism,” the Pontiff continued. “Indeed, it is through baptism that we become members of the one Body of Christ that is the Church.”

Francis and Tawadros met for the first time three years ago, marking the 40th anniversary of the meeting of their predecessors.