Once we met Saint Dymphna, everything changed for the good 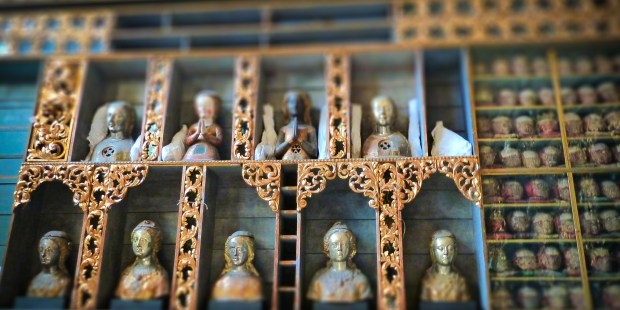 My wife Loretta and I were living in northern New Jersey with our two sons, ages 6 and 2. We wanted more children, and had hoped for a girl, but doctors told Loretta she would never have more kids.

So be it. We had been blessed with two healthy sons.

One day, my mother-in-law was planning to stop at our house for a while, on her way home from visiting St. Benedict’s Abbey in Massachusetts.

“Wait until you see what I have,” she announced as she breezed through the front door.

She reached into her huge purse and pulled out a beautiful, gold container.

“Look inside the glass. It is a first class relic of St. Dymphna. She is the patron saint of mental and emotional disorders. I asked the priest at St. Benedict if I could borrow this for Marion and Kelly. I’m going to bring it to the hospital and touch it to both of them and ask St. Dymphna for her help.”

Marion, our 14-year-old niece, was in the hospital because of her battle with anorexia. Kelly, 16, was facing the same struggle, and the two had become friends in the hospital.

Kelly was down to about 45 pounds and Marion, two years younger, was hovering around 65. My mother-in-law wanted desperately to help these girls who were slowly killing themselves.

My brother-in-law came by later that afternoon and took his mom to visit the girls. She held the relic next to each girl’s chest and prayed to St. Dymphna to intercede for them to help them get well. Time would tell how God would respond.

Doctors thought Kelly would not survive but, miraculously, both girls did recover.

St. Dymphna, though, wasn’t done bringing surprises to our family, and for me, a bigger one was still to come.

It was about six weeks later. Loretta and I hired a babysitter and headed to the local Italian restaurant. As we ate our lasagna, she casually commented, “Oh, by the way, I’m pregnant.”

Holding a forkful of lasagna in front of my mouth, I stared at her. A moment or two passed and, as tears ran down her face, she said, “I used the relic.”

She had taken the St. Dymphna relic, and holding it to her womb, prayed to the teenage saint. She asked her if she could help her with pregnancy issues. Seven and a half months later, our daughter was born. We named her Mary Dymphna.

The next day, I was beside Loretta in the hospital, as she lay holding Mary Dymphna. An elderly lady delivering newspapers poked her head in the room. “I never speak to patients but for some reason I had to talk to you,” she said. “Could you please tell me your baby’s name?”

So help me, this old lady started crying. “I knew it, I knew it. St. Dymphna saved my life a long time ago. I knew this baby had something to do with her.”

The lady came over, touched Mary’s face and gazed at her. She was seeing something we could not in an inexplicable spiritual moment, born of faith.

So, who was this saint who personally stepped into our lives?

Dymphna was the daughter of a pagan king by the name of Damon, in 7th-century Ireland. Her mom was Christian. When Dymphna was 14, she took a vow of chastity and dedicated her life to Jesus. Shortly after that, her mom passed away and her father became very distraught. Damon, under pressure to remarry, insisted that any new wife would have to resemble his first. His aides searched far and wide but could find no one who resembled the dead queen, except his daughter, Dymphna.

Damon, losing all sensibilities, demanded that Dymphna marry him. The girl, along with her confessor, Father Gerebernus, fled Ireland and landed in Belgium. Damon tracked them down. He had Father Gerebernus killed and demanded that Dymphna return with him to Ireland. She refused. Her own father drew his sword and cut off her head. She was 15 years old.

When the remains of St. Dymphna were found, miracles began happening immediately. People with varied cases of mental illness were cured. A church was built in Gheel, Belgium, in honor of the teenage saint. To this very day people in Gheel will accept the mentally ill or handicapped into their home without question. Sociologists still study the success of this phenomena.

The connection for me, my family and the teenage saint is a beautiful thing. And it continues.

Loretta died of melanoma 14 years ago. I later married again. My wife of nine years, Marty, has been diagnosed with Alzheimer’s disease.

Guess who is the patron of Alzheimer’s patients? St. Dymphna.