The Skateboarding Friar that Took Home an Emmy

“All tricks and vocals are done by Friar Gabriel.”

That’s not something you see every day in a video description. But Friar Gabriel is no ordinary man: Not only is he skilled in Gregorian chant, he also performs all of his own stunts on the skateboard.

And this extraordinary Franciscan friar caught the attention of the National Academy of Television Arts and Sciences. In late 2015 the video put together by Spirit Juice Films took home an Emmy in the Chicago/Midwest chapter.

“I wanted the fruits of the video to be simply love,” Friar Gabriel shared in an interview:“the love of God and neighbour and love for the Blessed Mother that the world has not seen. We do everything for the glory of God and for the love of the Blessed Mother, and (with this video) we have been able to achieve this on so many different levels.”

Friar Gabriel started skateboarding long before he had to worry about a habit getting caught in the wheels. For seven years he honed his skills before he eventually discerned a vocation to religious life and left the skate park for the friary. There he would go six years without touching his board.

Then one day his superior gave him an unusual order: get a skateboard and go to the skate park once a week, evangelizing with his witness. And faithful to his vow of obedience Friar Gabriel went. He has reached so many people while skateboarding, especially young men, with his countercultural testimony. And now, thanks to the film by Spirit Juice, he is reaching people across the globe.

You can purchase Friar Gabriel’s “Salve Regina” on iTunes.And to learn more about the Franciscan Friars of the Immaculate, head to their website. 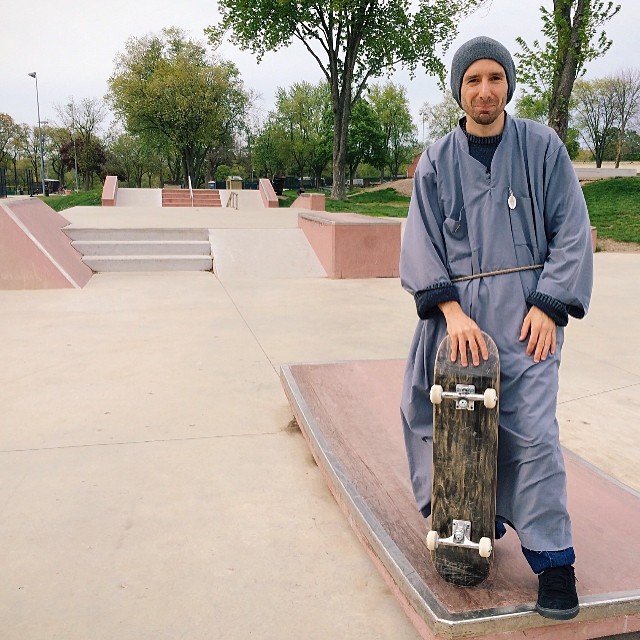