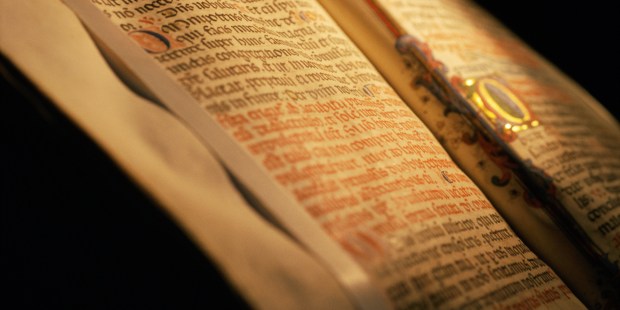 The conservator called the finding miraculous: “We never before had to deal with a manuscript recovered from a bog.”

In 2006 an Irish worker discovered an amazing find while digging in a bog with his backhoe at Fadden More.

Sticking out of the earth was an ancient manuscript, miraculously intact after more than a thousand years. Archeologists were quickly notified and carefully retrieved the manuscript and began at once investigating it and putting the pieces together.

Senior conservator John Gillis stated, “We never before had to deal with a manuscript recovered from a bog,” and said its survival after all these years in such an environment was “miraculous.”

It took more than four years of preservation work to discover the many treasures hidden inside the manuscript.

According to the National Museum of Ireland, “The Faddan More Psalter is composed of 60 sheets of vellum which are divided into five gatherings, or quires. The text is based on the Gallican Psalter, a version of the Latin Psalter devised by St. Jerome in the late 4th century. The text is written with iron gall ink, and a red and yellow pigments are used for decoration. It contains the standard 150 psalms. The opening letter of each psalm is marked by a capital and the opening words of Psalms 1, 51, and 101 are decorated, a convention used in other Irish psalters.” The Psalter has been dated to c. 800 and is one of the earliest Church documents found in Ireland.

When the manuscript was found it was opened to Psalm 83 and some saw it as a prophecy regarding the destruction of Israel. However, Dr. Patrick Wallace pointed out that the numbering of the Psalter was according to the Septuagint and differs slightly from our modern numbering system of the Psalms. He said what was found was “part of Verse 7 of Psalm 83 in the old Latin translation of the Bible [the Vulgate] which…would have been the version used in the medieval period.” The text of Psalm 83(84) reads:

1 Unto the end, for the winepresses, a psalm for the sons of Core.
2 How lovely are thy tabernacles, O Lord of host!
3 My soul longeth and fainteth for the courts of the Lord. My heart and my flesh have rejoiced in the living God.
4 For the sparrow hath found herself a house, and the turtle a nest for herself where she may lay her young ones: Thy altars, O Lord of hosts, my king and my God.
5 Blessed are they that dwell in thy house, O Lord: they shall praise thee for ever and ever.
6 Blessed is the man whose help is from thee: in his heart he hath disposed to ascend by steps,
7 In the vale of tears, in the place which be hath set.
8 For the lawgiver shall give a blessing, they shall go from virtue to virtue: the God of gods shall be seen in Sion.
9 O Lord God of hosts, hear my prayer: give ear, O God of Jacob.
10 Behold, O God our protector: and look on the face of thy Christ.
11 For better is one day in thy courts above thousands. I have chosen to be an abject in the house of my God, rather than to dwell in the tabernacles of sinners.
12 For God loveth mercy and truth: the Lord will give grace and glory.
13 He will not deprive of good things them that walk in innocence: O Lord of hosts, blessed is the man that trusteth in thee.

The most significant find was the original leather cover that protected the psalter. It was found intact and provided an insight into the origins of the Irish church. The inside of the leather cover “is lined with papyrus, a writing material produced from reeds grown in the eastern Mediterranean, famously in Egypt. The papyrus was probably placed inside the cover to act as a stiffener.”

Some scholars believe the “discovery of Egyptian papyrus represents the first tangible connection between early Irish Christianity and the Middle-Eastern Coptic Church.”

Two pages of the Psalter are currently displayed at the National Museum of Ireland and because they are so sensitive to light, they can only be displayed three months at a time. It is regarded as one of the greatest finds in Ireland since the Ardagh Chalice.