Before he was a priest, he had a great love 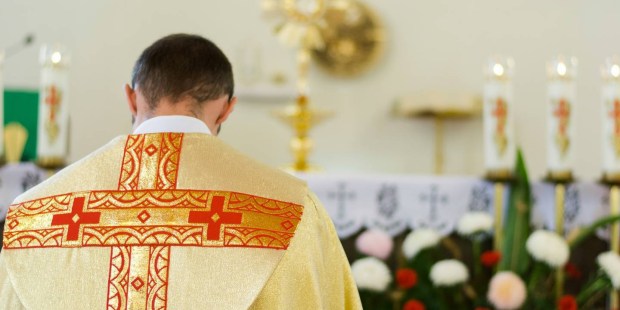 He became a priest thanks to her — and their story is beautiful!

Once, I fell in love.

It was a long time ago, before I became a priest, before I went to the seminary. Her name was Valentina. She had long black hair, down to her shoulders, that she always wore tied back or adorned with something. Her big green eyes were the window to her soul; they revealed the most beautiful secrets. If she was beautiful on the outside, she was more so on the inside. Perhaps that’s why I fell in love.

I still remember the first time I saw her. I was an altar boy at the parish of St. Joseph. It was a small church and we all knew each other. So it was to be expected that someone new would draw attention. And there was Valentina, with her father and her sister. Mr. Bernini had just moved to town with his two daughters, having been left a widower.

Even today, I can’t describe the sensation that Valentina’s sweet, irresistible smile caused in me. I can only say that it was enough to distract me during Mass, obviously costing me a good confession. I was 15.

Even though I was a little gangly, I was a good kid. I think she saw that and that’s why she fell in love with me. Valentina’s beauty was a reflection of divine beauty, making me feel that when I was beside her I was in Heaven. If you’ve found someone that allows you to live Heaven on earth, don’t take it for granted.

Valentina was the great love of my life. Allow me to explain. I was sure that I had beside me the most beautiful girl in the world. She lived smiling. And I had won her smile. I felt that above all, we were becoming friends. Mass each morning, the rosary at the end of the afternoon, kisses on the cheek, the blessing of Father George and even of Mr. Bernini. Everything was working in our favor. I was certain of one thing: I was the happiest 15-year-old in the world.

And yet, I felt incomplete and I didn’t understand how that could be possible. If Valentina wasn’t enough to “fulfill” me, what could possibly be enough? God. The powerful and irresistible call of God resonated in me and I understood everything: He was the ideal to whom I’d give my life completely, the only reality capable of calming my thirst.

I will be eternally grateful to Valentina. God worked through her to show me that not even the greatest earthly beauty could compare to His. With sorrow and tears, we parted ways. I went to minor seminary.

But these thoughts would vanish quickly when I’d think of how I am happy as a priest. I’ve been a priest for 19 years now.

She also was happy. She got married and had four children — among them a Carmelite and a seminarian — she was a fantastic mother and had a devoted and noble husband.

It’s 7:42. I’m getting ready to leave the rectory. I was awakened at 6:30 by a phone call giving me bad news. Valentina had died. Valentina the fighter, who battled breast cancer, had chosen to rest.

I sat down to write, fearing that in leaving, she would take with her all of my memories of our holy friendship. I am a priest thanks to Valentina, and I am sure that my priestly ministry will be strengthened with her intercession from heaven.

More to read…“The Career Pope Francis Shelved for the Priesthood”