6 Flowers (other than roses) that say “I love you” 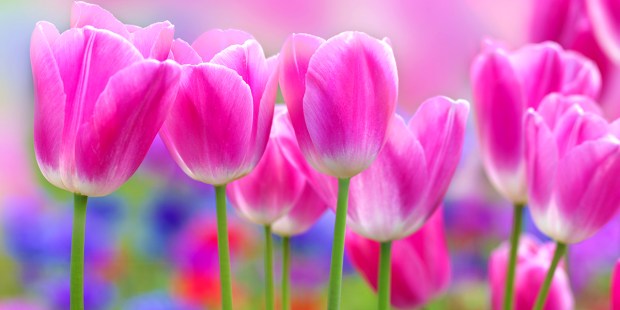 There is much more to love in the language of flowers than the genus rosa.

Love for another person was felt before we, as children, had a word for it. And before we would personally know the love of Jesus, we already experienced love from God.

Throughout history, especially in art, love has been represented through plants and other living things.

Around St. Valentine’s Day, the floral industry would have us believe that the rose is the best representation of true love. But there is much more to love in the language of flowers than the genus rosa.

Tulips were first brought to Vienna from Persia in the late 16th century. “According to an ancient Persian legend, the tulip was born of the blood and tears of a girl who had ventured into the desert in search of her lover. It thereafter became a symbol of love.” (Nature and Its Symbols, Getty Publications).

The red tulip carries the sentiment of a promise of love that will never grow old; and a purple tulip represents mature or eternal love.

Bold yellow—a color that is associated with hope and happiness—and the spiral seeds of the sunflower symbolize unconditional devotion and an ever growing love. (The sunflower’s spiral of seeds will generally contain the Fibonacci sequence, where the next number in the sequence is the sum of the previous two. Kind of an amazing image when we think about how love grows!)

The maturing sunflower follows the movement of the sun (a motion called heliotropism, the origin of the genus name Helianthus) as young lovers look toward their beloved. It is a wonderful flower for a child’s prayer garden to teach how, as we flower in faith, our minds and hearts turn toward the Light of God.

Carnations symbolize the pledge of love and a promise of marriage. The name of the flower, dianthus, is derived from a Greek word meaning “God’s flower” and alludes to Christ. Carnations represents the deepest love between spouses, and also God’s greatest act of love—the Incarnation.

An azalea, available potted and wrapped with a bow, is an excellent flower to share when people in love are apart. The flower connotes “take care of yourself for me,” as well as remembering and longing for home with fondness. During the Victorian era, the symbolism was adapted to mean temperance, for self-care requires a sense of moderation that benefits others besides you.

Men can also receive flowers as a sign of love and affection and the orchid is a good option. The phalaenopsis orchid (sometimes called Moth Orchid) blooms for weeks with minimal care. Orchids represent masculine love. The family name orchidacea—which includes vanilla!—comes from the Greek and Latin word orchis and symbolizes virility.

Whatever you do, don’t give the white daffodil, narcissus, to your beloved—unless they’re dead! It is a funerary symbol of divine love after death, the triumph over sin. Given to the living, it carries the connotation of self-love and stupidity. The mythological figure, Narcissus, is the origin of that sentiment.

Instead, give a bouquet of yellow daffodils, which carry the beautiful sentiment of new beginnings, where affection finds an origin.