The day I almost died in childbirth 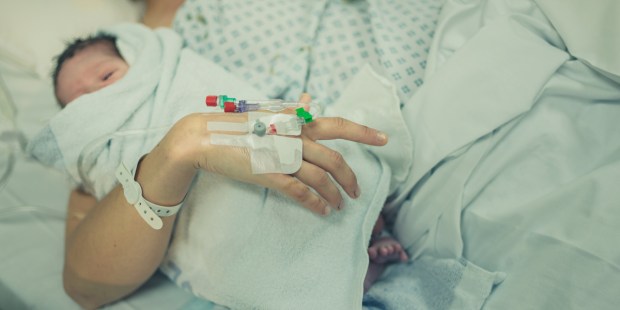 American women are dying at increasingly higher rates than those in other countries. Here’s how we can change that.

I almost died the last time I gave birth. If it weren’t for vigilant nurses, an incisive doctor, and a well-prepared delivery room, I could easily have become a statistic — just like Lauren Bloomstein, a neonatal nurse who died in the hospital where she worked and about whom ProPublica wrote an extensive article that illustrates the alarming numbers of US women who are dying in childbirth.

In one 35-second video, Lauren holds their daughter on her chest, stroking her cheek with a practiced touch. Hailey is bundled in hospital-issued pastels and flannel, unusually alert for a newborn; she studies her mother’s face as if trying to make sense of a mystery that will never be solved. The delivery room staff bustles in the background in the low-key way of people who believe everything has gone exactly as it’s supposed to.

Then Lauren looks directly at the camera, her eyes brimming.

Twenty hours later, she was dead.

The story of Lauren’s death ought to terrify us, because both she (a neonatal nurse) and her husband (an orthopedic trauma surgeon) not only knew something was wrong but even what that something was — preeclampsia. Nevertheless, they were helpless in the face of obstinate neglect by staff in the very hospital where Lauren worked: nurses and doctors failed to monitor her appropriately, refused to take her pain and her husband’s concerns seriously, and allowed her to die needlessly.

Read more:
Pregnant? 12 Medical Decisions You Need to Make Before the Contractions Start

They could have saved her, and that haunts me, because if it weren’t for a series of last-minute flukes, my life would have ended much like Lauren’s.

I had planned to deliver at the birth center a few blocks from the hospital. I’d had four uncomplicated pregnancies and deliveries, and both the baby and I were healthy. But I’d had a traumatizing experience at the last hospital where I’d delivered and I was terrified of giving birth at any hospital again. Luckily, a week and a half before my due date our pediatrician expressed her concerns about me giving birth outside of a hospital, which were strong enough that she pulled off the minor miracle of finding an obstetrician willing to not only meet with me that same day but take me on as a patient at 38 weeks.

The doctor was compassionate, supportive, and impressively thorough — she answered all my questions and concerns and promised me that she would be my advocate at the hospital. Most importantly, she wanted the details of each previous labor and delivery, asking me to slowly walk her through the timeline for each birth, so (as she put it) “there won’t be any surprises.” While reconstructing the details, I remembered that I’d bled more than usual after my previous births. But they had stopped it easily, so I thought it was no big deal.

She did, so she called the hospital and had them note on my chart to stock the delivery room with pitocin and with another medication she assured me we probably wouldn’t need — she’d rather be safe than sorry.

Read more:
How “That Stupid Pregnancy Bump” Changed Me Forever

Between my doctor and my husband, the nurses were fully briefed about my past experiences and were equally careful. So when I mentioned that I felt a little strange about 20 minutes after the baby was born, they didn’t glance at my steady vitals and assure me it was nothing. They left the monitors, came over to look at me, and when I couldn’t explain what I meant by “strange,” they did a head-to-toe exam: I was hemorrhaging.

The pitocin hadn’t worked, and neither had the “rather safe than sorry” medicine, and by that point I was starting to losing consciousness. I blurrily remember alarms blaring, codes being called, the nurses’ dismay that the medication hadn’t worked, and my doctor skidding into the room and the nurses helping her scrub up.

She eventually stopped the hemorrhage using a Bakri balloon, a recent invention that’s highly successful but not widely used. The nurses kept telling me how lucky I was to have escaped an emergency hysterectomy, so I knew it had been serious. But it wasn’t until the next morning, when our pediatrician came to check on the baby that I realized how serious it had been.

“If you’d been at the birth center, you’d be dead right now,” she told me bluntly. “Even in a hospital, this is a lucky outcome.”

She’s right. Amid an infant mortality at its lowest point in history, and while rates have fallen in the rest of the developed world, maternal mortality has steadily increased in the US in the last 14 years. Many factors play into this: poverty, obesity, lack of access to health care, advancing maternal age. But none of them fully account for the number of US women dying in childbirth.

For 50 years the public health community has focused on infants — reducing birth defects and preterm birth, and improving outcomes for very premature babies. But that focus has come at the expense of maternal morbidity, as the ProPublica article details. Mary D’Alton, chair of OB-GYN at Columbia University Medical Center, sums up maternal-fetal medical training in the U.S. in frightening terms: “There were some fellows that could finish their maternal-fetal medicine training without ever being in a labor and delivery unit.”

The rising attention being given to the disparity in care between mothers and their children is bound to engender some changes, and in some states it already is. Meanwhile, US women are giving birth every day. Are they totally at the mercy of luck and circumstance?

Not entirely. My experience leads me to believe that there are some ways that expecting parents can improve the standard of care during labor and delivery.

First, find an OB you really trust. Mine was exceptional — she made time to discuss everything with me and that attention to detail helped save my life. If your doctor rushes you and doesn’t answer questions or listen carefully, find someone else. Ask him or her about the symptoms of preeclampsia, DVT, hemorrhage, and other complications that can occur in pregnancy and childbirth. Ask when they would treat the symptoms, and how. Then get a second opinion, and compare notes.

Second, take your own health seriously. Not all complications can be prevented, but some can. Stay active, eat as healthy as possible, and prepare for childbirth in the same way that you’d prepare for any other grueling physical challenge.

Third, get to know the hospital where you’ll deliver. Don’t just register; go by the nurses’ station and introduce yourself. Ask if they have time to speak with you about your concerns. Be kind and friendly, and make it clear that you know how vital they are to your health and well-being. Enlist your husband to go with you so that you’re both familiar faces when you come back to give birth.

It’s okay to be afraid, but don’t despair. Being aware of risks and staying vigilant already puts you in a better position than most first (or second, or third) time moms. ProPublica painted a pretty grim picture of maternal mortality in the U.S., but the article going viral the way it has is probably the best thing that could happen for all mothers. The more attention given to the widespread neglect of maternal health, the greater our chances of reversing it.