4 Married couples talk about their ordinary, extraordinary lives together 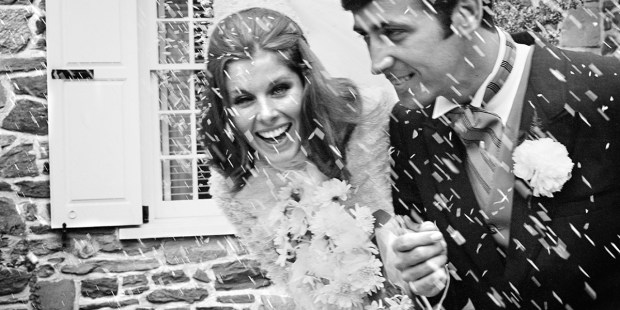 Hearing others’ love stories and lessons learned can inspire and encourage us all.

I’d argue that it wasn’t spying as much as noticing. My friend’s 10th-floor apartment in New York City gave me a direct view into the building across the street, and specifically into the home of a couple whose steel-gray hair and slow, deliberate movements told me that they were elderly.

Read more:
Struggling in your marriage? Think of Mother Teresa and don’t give up

I first noticed them when she came into the kitchen, arms loaded with groceries. He turned and hurried to unburden her. They chatted while unpacking the bags, opening and closing the fridge, and arranging fruit in a large bowl. Later they prepared dinner together. He laid out the plates, and she lit the candles on the table. Before they sat down to eat, he drew her close into a tender embrace.

You can see why I couldn’t keep my eyes off of them.

Here are glimpses through the window of marriage at the ordinary, extraordinary lives of four couples.

Rob and I were married August 2, 2008, and we’ve been friends for 20 years. We met at NBC in Los Angeles. He was a writer and I was the weekend producer. We became friends instantly. Within a few months, we were both promoted. He became the 5 p.m. producer and I was the 6 p.m. producer, and we worked side by side every day.

We are the parents of three sons—I have two boys from a prior marriage and Rob has one son from his previous marriage. Together we have two dogs and two cats.

Read more:
What’s an ‘act of love’ in a marriage?

There’s nothing like a second chance to make you value something you have once lost. And there is nothing like a failed marriage to help crystallize what marriage means to you. I feel like no one has ever seen me, known me, understood me, or appreciated me the way that Rob does. I’m not afraid to let him see the worst in me. There’s no pretending with him—I get to be me.

Rob calls me “Tiger.” He almost never uses my actual name. “Tiger” sometimes morphs into “Tig” or “Tigger.” I call Rob “Robbie”— which he says he hates. But no one else in the world is allowed to call him that, so I love it.

We have the same profession. We both started out as television news producers. We then launched our first business in 2002, a documentary production company. In 2014, we started a second company, a gourmet food company called The Art of Caramel. We run both companies together, so we have the same job titles and duties.

Our favorite home-cooked meal is probably a piece of grilled fish and roasted veggies. Our more frequent home meal of late is a plate of arugula with burrata, avocado, and almonds—with some balsamic vinegar on top. On busy, busy nights we have the Japanese restaurant up the street deliver soup and sushi to our door.

I’m half Japanese, and would love to take Rob to Japan to meet my family there. Rob has never been and really wants to go. Once we get through paying three college tuitions, it’s on the bucket list.

I think the most unique characteristic about our marriage is how much time we spend together. We work together, we play together, we raise our children together, and we take baths together—almost every night. We both like a lot of order. We tend to approach problems and challenges the same way.

Read more:
The 7 phases of anger in marriage

In other ways, we are so different. He loves science and space and computers and classical music and many other things that I don’t care about. I love all things girly: fashion, decor, cooking, pop culture—and he has no interest in those things.

I love that we have our own interests and passions and we try to make room for each other to enjoy those things.

We’ve been married for 18 years and have three children together.

We met because we both attended a small coffeehouse church in Washington, D.C. A friend and I set Daniel up with my roommate. They dated for a year and even got engaged before things fell apart. By that time, Daniel and I knew each other really well. He was devastated by the break up, and as he put himself back together, we started hanging out and doing stuff together. Eventually, it made sense to just start dating.

Daniel is an introvert and gets anxious about some interpersonal interactions, but he has a real gift of getting along with, and having a genuine interest in, all kinds of people. Back when we lived in D.C., he would take this guy, Michael, out for pizza every few weeks. Michael was mentally disabled and could be hard to talk to. Other people might assume that Daniel took him out for pizza to be kind, but Daniel really enjoyed his company. I see that kind of behavior from him all the time.

During all kinds of stressful times, we really try to be generous with each other—to listen well, to give each other a break, to do small kind things—even when we’re worn out and tempted to just take care of ourselves.

Our common faith supports our marriage. It’s this basic glue that holds us together. It’s never a source of conflict and it feeds into our sense of being partners. We’re also empowered as a married couple by humor and respect.

I refer to Daniel as “Dinger” or “The Dinger.” We’ll both talk about him in the third person, as in: “Dinger loves pulled pork!”

I am a freelance writer and editor, and Daniel is a librarian (director of collection development) at Yale University.

Boxed macaroni and cheese or a burrito bar.

We love the National Parks, and haven’t yet seen Yellowstone. We’d love to go to the Canadian Rockies or Alaska.

In your interactions with others, from your kids and in-laws to your friends and coworkers, act and speak as a team—always have each other’s back.

I think part of why we’re still happily married is that, unlike most couples, we never really had a “romance” and so have never had to make that hard adjustment from marrying the person of our dreams to realizing that we actually married a flawed human being.

In a lot of ways, we are each very different from the kind of people each of us was attracted to previously. For example, I always was attracted to these tall, outgoing, charismatic, activist change-the-world types, and Daniel is a 5-foot 6-inch introverted librarian. He was attracted to women who were athletic, and into hiking and backpacking. I have a physical disability and simply can’t do that stuff.

So from the start, we couldn’t project our desires onto the other person.

We met on a dark and stormy night at University of Illinois. We met by chance on our way to a dive of a bar, and we had our first date about eight months after that.

Sam says I have great insight into other people and that I’m really witty. He’s right! We’re fortunate—we have not had a difficult time, yet. Life isn’t perfect, but the kids are healthy and we are healthy. That’s all that really counts.

We don’t use them; cutesy nicknames make us queasy.

Sam is an IT executive which means everyone blames him when their computers don’t work, and I am a stay-at-home mom and chronic PTA volunteer.

Tacos! Everyone eats them and they take 20 minutes to make.

Our dream trip is a month-long tour of Europe. Sam loves museums, history and sightseeing. Honestly, I’m not a fan—I prefer sunny beaches and drinks with little umbrellas. For him, however, I will buy a pair of comfortable walking shoes and try to minimize any complaining.

Turn off the TV every once in a while and listen to what your spouse is saying.

Sam and I don’t fight. We certainly have disagreements, but we do not fight. Sam claims that neither one of us have said a hurtful word in 22 years. I’m positive that is true about him. And, if he says this is true of me, I believe him.

Shawn and I have been married for 15 years and are parents to three young daughters. We met in logic class our junior year of college. I was caught off guard by his brilliance, beauty, and humility. Shawn is often the smartest and most competent person in the room, but he never talks about himself or his accomplishments. I often wonder if, in this dog-eat-dog world, it has cost him. But he follows the way of Jesus when it comes to humility.

Our marriage is empowered by our unswerving mutual commitment to promote the well-being of the other—to see to it that each of us is well situated to flourish, to pursue our interests, and cultivate our talents. This often entails considerable sacrifice from both of us.

Shawn says that one of the very first things that attracted him to me is what he describes as my “profound courage.” He says I’ve seen the light and that this emboldens me to “stare down the darkness.” We’ve had difficulties and stress in our lives resulting from my three pregnancies because I’ve had to be on almost complete bed rest. I’m unable to do much of anything—including earning income—when I’m pregnant. As a result, Shawn has functioned much like a single parent while working full-time and caring for the girls.

During those times, we’ve been sustained by confiding in our friends and by asking for help from them and our church communities. We could never have survived on our own because we don’t live close to family.

We have a treasure trove of nicknames for one another and our children. But most commonly, besides “honey,” I call him “Dits” and he calls me “Mims.”

Shawn is Philosophy professor at University of Findlay and I’m a pastoral care minister, writer, and adjunct professor at Winebrenner Theological Seminary.

We would love to go backpacking through Europe to see the beautiful countrysides, cathedrals, and universities. We’d like also to go on religious pilgrimages. Hopefully we’ll get to do it in this life.

Stay away from faultfinding and a critical spirit; learn to truly listen to one another.

We feel we hit the jackpot with our relationship. Despite hearing about so many difficult marriages, there are good ones. I don’t mean that we don’t have spats, but we’ve experienced nothing that’s been soul crushing.

Our strong marriage is fueled by our level of conversation and intimacy. We are mind mates and both so utterly cerebral. Conversations happen on hikes, walks, on the phone, and at night.

We’re a mutual admiration society—always so curious about each other’s opinion on a variety of topics including theology, philosophy, culture, and politics. Every single day we are chomping at the bit for the other to get home because we thoroughly enjoy each other’s company. We’d like to think our three young daughters are being positively formed by our love for one another—and, of course, our love for them.