The 7 phases of anger in marriage 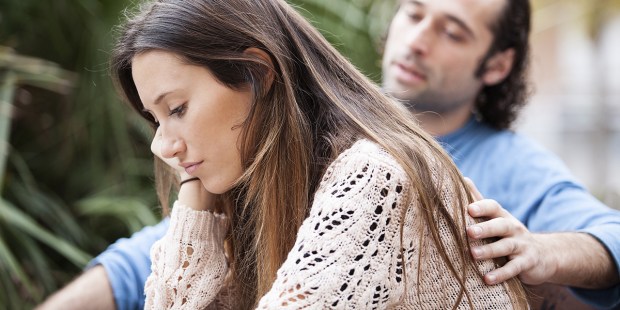 It’s important to extinguish the first few sparks of anger and not let it become a consuming fire.

Anger is a dangerous fire that can destroy a marriage if it’s allowed to grow unchecked. Anger generates anger until it becomes an overflow — then emotions take over and reason flies out the window.  When people are caught up in anger, they don’t look for logical or fair solutions; they just talk and talk, seeking to offend or physically harm the other – even though the angry person is the one who ends up the most hurt.

Read more:
Struggling in your marriage? Think of Mother Teresa and don’t give up

The husband may complain about the roller coaster of his wife’s feelings, and she may complain about his indifference. These emotional differences may occur in part because of psychological issues or because of the way they were raised and their childhood environment. What is certain is that emotional ups and downs hide unresolved internal conflicts that are camouflaged and are revealed according to circumstances.

However, aside from the emotional differences and the unresolved internal conflicts, there is also the freedom to overcome conflict within the marriage and not put up barriers over the difficulties. Love is the greatest motive for seeking self-knowledge and practicing good will.

Anger unfolds on 7 levels within relationships. The ideal is to cut it off in the first stage, before it becomes an all-consuming fire.

This is the stage in which loving feelings still predominate and the beloved’s angelic aspects (youth, beauty, grace, and kindness) help the couple to enjoy a happy and spontaneous life together. When the couple argues, they know how to extinguish the first sparks of upset feelings and keep it from catching fire. Their requests for forgiveness are spontaneous, as are their delicacy and tenderness.

The first conflicting differences begin to emerge, but the couple finds an escape valve by seeing the humor in them. That’s why they even tell the story in family reunions: “He said this and I answered that…” It is the stage in which husband and wife describe in a natural way their successes in the face of internal situations of difficulty in living together, without value judgments, disqualifications, or insulting adjectives. They correct each other with good manners and loving attention.

Defects and mistakes no longer go unnoticed. Complaints are accompanied by criticism, not of deeds or actions but of the person, with adjectives that humiliate the recipient. This begins to generate the first defensive reactions. The first silences of disgust begin. Even so, the couple argues with care so that their children won’t overhear them.

Complaints are replaced by harsh criticism of the other, with a more corrosive emotional impact, since defensive and counterattacking attitudes are more frequent. The first verbal expressions of disdain appear, accompanied by irony and sarcasm, reinforced by body language with a clear intention to make the other feel bad: improper gestures, a forced smile, a twisted lip. Feelings of abandonment begin to appear and the silences are longer.

The couple still believes in its love, but is already in the danger zone.

Criticisms loaded with disdain are more frequent. The complaints are increasingly louder, with insults wounding each other’s self-esteem. Insults come up like: idiot, witch, imbecile. Far from not giving a bad example to the children, the couple also makes them the object of their aggression.

Their pride is full on opposed to the possibility of reconciliation. The couple does not accept forgiveness and begins to speak ill of each other to others.

Thus, the relationship begins to fall. There is a great likelihood of separation.

Anger appears, which generates more anger, until it turns into hatred. This unleashes the increasingly destructive reactions that make the other feel ashamed, guilty, and defective, which in turn provokes a defensive response of disproportionate fury and desire for revenge.

The spouses use their children as an instrument of revenge, demanding that they take sides. Each burrows deeper into the other’s wounds, and the two fight over who loses more.

Each blocks out the other and the two only have negative thoughts between them. They openly declare themselves enemies and trigger the emotions that lead to expressions of hatred or physical violence.

Their behaviors have a strong pathological component. They cannot listen without distortion or respond lucidly. They cannot organize their thoughts and they fall into primitive reactions, such as physical aggression and punching the wall. There is no choice but separation.

It is important to seek a specialist’s help when a couple detects signs of an emotional intelligence deficit in one or both spouses and when the emotional ups and downs are becoming a danger to the relationship.

This article was originally published in the Portuguese edition of Aleteia.