Is this the tablecloth used at the Last Supper? 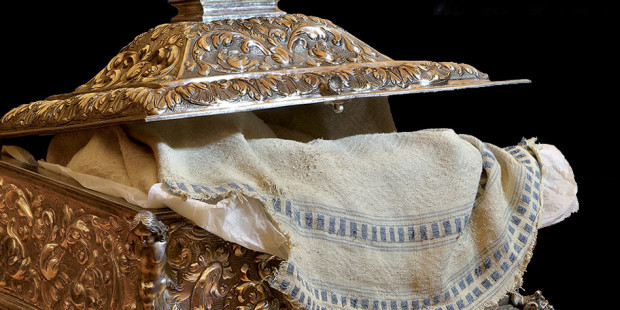 It is kept in the Chapel of the Relics of the Cathedral of Santa Maria de la Asunción de Coria, Spain.

The Cathedral of Coria, in Extremadura, Spain, took about 250 years to build. Its history is a long and complex one, and some studies indicate that some of the building elements composing the structure date from the first century.

According to the doctoral thesis of Maria del Carmen Sanabria Sierra, writing  under the direction of the renowned art historian Victor Nieto Alcaide, the cathedral may have been the first Christian temple in the entire Iberian Peninsula. A Roman mosaic found in its cloister could be the smoking gun proving it so.

The cathedral occupies the former site of a Visigothic cathedral, the city’s main mosque and an old Romanesque cathedral.

Its construction, which began in 1498 (six years after the Reconquista), was completed around 1748, but the Lisbon earthquake of November 1, 1755, seriously damaged it.

Although the church itself is an exceptional masterpiece of the Spanish Baroque (it houses both Churriguera’s and Diego Copín de Holanda’s works), it is better known as the church in which what is assumed to be the tablecloth used by Jesus and the Twelve Apostles at the Last Supper is kept.

Officially, the Church preserves this relic because of tradition, but also because there is no evidence that would settle the question on the tablecloth’s authenticity. However, recent studies have linked this tablecloth with the Shroud, explaining that they may well have been woven at the same time, and also used together in the Cenacle.

Read more:
Is this building both the Tomb of King David and where Jesus’ Last Supper took place?

John Jackson, director of the Turin Shroud Center in Colorado and a former member of NASA, conducted a study on this tablecloth in 2014. It was Jackson himself who, analyzing the Turin Shroud, explained it might have been, originally, not a shroud but a tablecloth. When his team measured the canvas of the Coria tablecloth, they discovered its dimensions were almost identical to those of the Shroud, preserved in Turin’s Duomo. Rebecca Jackson, a member of the team, commented in this interview that, in her opinion, “the Shroud and the Coria tablecloth were used together at the Last Supper.”

“For the Jews, in the great solemnities, and [Passover] being the greatest of them all, it was common to use two tablecloths in a ritual way, to remember the journey through the desert after leaving Egypt,” she explains. “A first tablecloth on which food was deposited, was followed by a second cloth one would place on top of the plates, to prevent sand from falling into the food, as well as to keep insects at bay.”

According to an article published in the Spanish journal El Mundo, Ignacio Dols — a delegate of the Spanish Society of Sindonology — said, “Jackson’s intuition makes sense because Christ was buried in a rush. He died around three o’clock on a Friday afternoon, and was to be buried before approximately six o’clock on the same day, right before Sabbath began.”

That means in just three hours Joseph of Arimathea had to reclaim Jesus’ body from Pilate, obtain permission to bury him, transfer him to a tomb, make preparations, shroud the body, and seal the tomb. “The reasonable thing,” Dols explains, “is that he used whichever elements he had at hand, and a tablecloth of those characteristics was in fact the perfect way to shroud a body.”