Trouble getting along with your mother-in-law? There’s a reason why 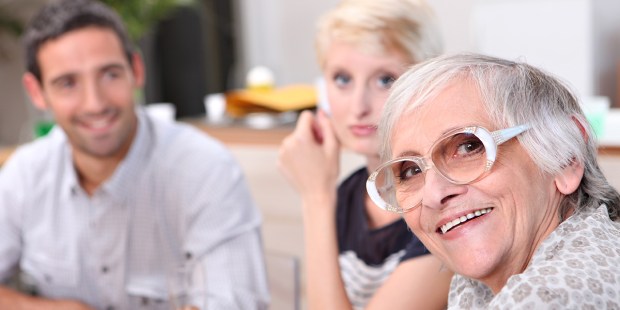 Here’s some of the psychology behind this cliche, and you can find greater peace.

Of all the relationships in family life, the one between mother-in-law and daughter-in-law is often the most tenuous one. While it’s possible for these two women to share close bonds, it’s common for it to be tense (or worse), with shaky truces being silently negotiated every couple of months. To use the word “truce” might make you think of a war, and it’s true; sometimes this relationship gets downright embattled.

Read more:
What my mother-in-law taught me about my own cold heart

But why? If there’s a battle, where and why do a mother-in-law and daughter-in-law draw lines? What is the point of tension? From my perspective, that’s an easy one to answer: the battle is for the husband/son.

To better understanding this, we should first note the unique bond between mother and son. For the son’s part, studies have shown definitively that without the proper attachment to his mother, a male’s chances of being violent or showing other instabilities grow noticeably. The same is not true of girls. (Girls and women, in general, do not tend toward physical violence like boys and men.) So, while it is often emphasized how often boys need a father to raise them into a man, this is true when it is time, but in the earlier years it is through the motherly bond that a boy learns lessons he will need as a man. He learns the truth of love through her gaze and care first. In other words, a man makes a man, but we want more than a man – we want Christian gentlemen – and it is the mother that puts the gentle in a gentleman.

Read more:
How Do I Deal With My Difficult Mother-In-Law?

For the mother’s part, attachment to her son is also uniquely strong compared to mothers and daughters. A daughter grows more like the mother as she becomes a woman. But a boy grows more unlike her. He clings more and more to the men and friends that he will be like. He especially clings to the father during adolescence. So, the relation becomes more distant even if the bond is unbreakable (think of Jesus “leaving” Mary during his public ministry to do His “Father’s business”). This does not mean it grows less loving or close. But at some point they begin to know each other as man and mother and not boy and mother. There’s a difference.

Yet, as special as the bond is, a boy must have the “apron strings cut” or he risks being what we might call a “mama’s boy.” The reason we call a grown male with an unhealthy attachment to his mother a “mama’s boy” is that part of the process of becoming a man is an appropriate separation from the mother’s oversight. When the separation does not occur, an element of boyhood remains.

This can be hard for mothers, because they have a special place for their boys in their hearts. In fact, mothers have been found to have the DNA of their sons forever “stored” in their brains, hearts, and other organs. “Mary kept these things in her heart …”  We already knew that the bond between a mother and a son is uniquely deep, but this confirms that a mother’s son is literally kept inside her body!

Read more:
Mary is not a “mother-in-law”

The reason the separation is necessary is that a man leaves the feminine represented by the mother to be re-integrated into the feminine through his wife. Marriage requires the total self-gift, so he cannot retain a boy-like affection for his mother while giving himself totally to his wife. “For this cause shall a man leave father and mother, and shall cleave to his wife, and they two shall be in one flesh” (Matthew 19:5).

This separation is hard for mothers. The sense of rejection, however, is often not felt until the time of the wedding, when the mother is finally and fully “replaced” as the primary feminine love in a man’s life. This moment can be the moment everything changes in a relationship between a man’s mother and his bride, because it has. This is also why and when the tension builds: the mother, perhaps unconsciously, blames the new wife for her feelings of rejection, and if there is any pattern or history of betrayal from other men, those feelings can emerge and lead to seeming unreasonable anger toward the new couple.

The new wife, for her part, can at times feel like her husband’s mother exercises too much influence on her son and can feel a weird sort of jealousy or sense of betrayal – she wants his whole heart! This becomes a greater problem if the son does in fact remain overly attached to his mother.

Read more:
Why Jessica Alba owes her financial success to her motherhood

One time, my wife and I saw our neighbor at the mailbox and we were discussing the neighbor’s newly married son. “I really like her,” the neighbor kept saying, “but I just feel so sad.” We had not asked what she thought about the bride of her son – we had only asked how she was doing. She felt sad because the wedding ceremony had made her realize that she had been “replaced,” in a way, as the most important woman in her son’s life. Naturally, she had strange feelings toward the new young bride that had displaced her. This is why she kept assuring us that she liked the new bride, even though it was her that was “making her feel this way.”

Another married couple I know described the new reality of a marriage this way: “Leading up to the wedding, we [the daughter-in-law and mother-in-law] were like best friends. But then after the wedding – the very day of the wedding – everything seemed to change and now everything is drama. I don’t know what happened!”

So what can we do? Well, as you know, interpersonal tensions and family wounds can be hard to navigate, but the greatest way we can lessen potential tension (whether “we” are brides, sons or mothers) is to acknowledge the truth and ask for grace.

Mothers must accept that their sons are men and husbands, meaning mom must, in a sense, submit to his authority in his home and not ever seek to influence the choices and directions of the family. She no longer has authority over him. She had her chance, and now he is grown. She must never speak ill of his new wife as a way to re-create a bond with the son, and she should not use guilt to try to coax him back in close to her or to do what she thinks is right.

Sons should cleave to their wives, and not sow unnecessary tension by, for example, discussing things with their mothers that they do not discuss with their wives, or seeking motherly advice or approval in ways that a boy would.  They should reverence their mothers and honor them as they are commanded by God to do, while doing so as men. They must give themselves totally and fully to their wives.

Wives should reverence their mother-in-law as well, with proper respect and gratitude for the gift of the husband. They should seek them out as mentors and, in the best case, develop friendships with the mother, united by their common love. While they may feel the tension at times, they have still married into a family and respect is important. If the mother is incapable of such a relationship and won’t “let go” of the son, a wife can have sympathy and focus on mutual trust with her husband so that the tension does not infiltrate and weaken marital unity.

And in all of this, we can know that it is God’s will that men and women join together in holy matrimony. We know that the fruit of that union is children, and that all of these relationships are good and capable of being holy and life giving. Even if tense and difficult, I think that the potential barriers also provide the opportunity for a closer union and greater love, if we allow truth and grace to give us light to see each other by.