Why is the Blessed Virgin Mary always wearing blue? 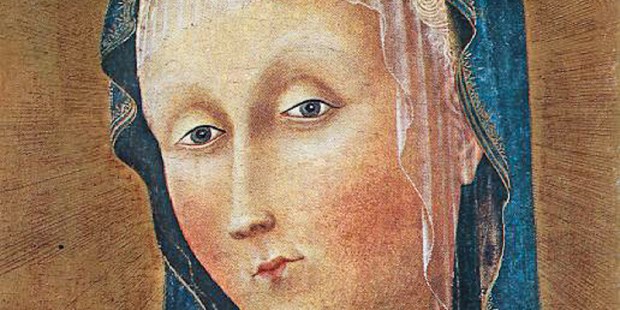 The color has multiple spiritual meanings, each revealing a different attribute of the Mother of God.

When viewing Christian art from the past thousand years or so, there is one color that is almost always associated with the Blessed Virgin Mary: blue.

Why is that? What significance does it have?

Read more:
Why you should love the Virgin Mary in sickness and health

To start off, the color blue has deep biblical roots in the Old Testament. According to Dr. R. Jared Staudt, the color is specifically mentioned as the color of the people of Israel in the book of Numbers.

Speak to the people of Israel, and bid them to make tassels on the corners of their garments throughout their generations, and to put upon the tassel of each corner a cord of blue; and it shall be to you a tassel to look upon and remember all the commandments of the Lord, to do them, not to follow after your own heart and your own eyes, which you are inclined to go after wantonly. (Numbers 15:38-39)

For the people of Israel blue brings to mind the following of God’s Commandments, as opposed to a person’s selfish will.

This was perfectly lived out by the Blessed Mother who said, “Behold, I am the handmaid of the Lord; let it be to me according to your word” (Luke 1:38). She was the faithful “Daughter of Zion” who fulfilled the call of obedience that God had asked of the Israelites.

Additionally, Numbers indicated that “the Levites are to ‘spread over [the Ark of the Covenant] a cloth all of blue’ (4:6). And further: ‘And over the table of the bread of the Presence they shall spread a cloth of blue’ (4:7).”

Mary is traditionally referred to as the new Ark of the Covenant, as she held within herself the Divine Presence of God.

On the other hand, the Byzantine/Orthodox tradition of clothing Mary in blue has a different meaning.

Blue in iconography represents transcendence, mystery, and the divine. It is the color of the sky and as a result is viewed as a heavenly color.

Red in contrast is seen as an earthly color, the color of blood.

Jesus is typically depicted in icons with a blue outer garment and a red inner garment, symbolizing how divinity wraps his humanity.

Mary on the other hand is seen with a red outer garment and a blue inner garment, representing how she carried divinity (Jesus) within her humanity.

When Mary appeared to Saint Juan Diego, she wore a blue-green mantel. According to the Knights of Columbus, “the star-speckled green-blue mantle symbolizes the heavens. In addition, the mantle’s color indicates her royalty, since only the native emperors could wear cloaks of that color.”

So blue is a very important color in the artistic traditions of Christianity and has deep spiritual meanings that bring out different attributes of the Blessed Mother. It is a sacred color, one that reminds us of Mary’s faithfulness and her privileged role in salvation history.

Read more:
How the Church’s Easter prayer to Mary brought the end of the plague