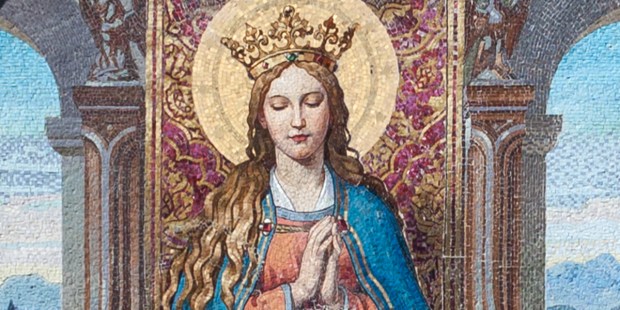 It’s a short prayer and brings a bit of Easter joy … but it’s especially poignant in our own day.

The Church offers us four prayers to the Blessed Virgin Mary prayed at the end of night prayer by Catholics everywhere; which of the four is used depends on the season.

From Advent through Candlemas, we pray the Alma Redemptoris Mater, during Easter the Regina Caeli, from Pentecost through the end of Ordinary Time, it’s the Hail, Holy Queen. And Lent has the Ave Regina Caelorum.

So we’ve just begun with the Regina Caeli, and this year, it couldn’t be any more appropriate.

According to legend, this prayer dates back to the 6th century with Pope Gregory the Great. A severe plague ravaged the city of Rome, even claiming the life of Pope Pelagius II.

It was a difficult time for the people of the city, and when Pope Gregory I was elected to lead the Church, he immediately set out to call upon the mercy of God.

Pope Gregory (he would later be known as Pope St. Gregory the Great) led a procession out from St. Peter’s Basilica past the Mausoleum of Hadrian in prayerful petition to end the plague. He invited everyone to pray to God that the plague would be lifted.

The Golden Legend narrates how the procession was led by an ancient image of the Virgin Mary, reportedly cleansing the air of disease. It is believed that this image of the Virgin Mary is in fact the one that Pope Francis has been using during the liturgies of Holy Week: the “Protectress of the Roman People,” attributed to St. Luke.

The plague was still ravaging Rome, and Gregory ordered the procession to continue to make the circuit of the city, the marchers chanting the litanies. An image of Blessed Mary ever Virgin was carried in the procession …

And lo and behold! The poisonous uncleanness of the air yielded to the image as if fleeing from it and being unable to withstand its presence: the passage of the picture brought about a wonderful serenity and purity in the air.

We are also told that the voices of angels were heard around the image, singing

As the procession continued around the city, St. Gregory reached the Mausoleum of Emperor Hadrian and saw a sight that brought peace to his soul.

Then the pope saw an angel of the Lord standing atop the castle of Crescentius, wiping a bloody sword and sheathing it. Gregory understood that that put an end to the plague, as, indeed, happened.

Eventually a statue of St. Michael the Archangel, sheathing his sword, was put on the top of the mausoleum, and inspired by this event, the faithful henceforth referred to the mausoleum with a different name: Castel Sant’Angelo (Castle of the Holy Angel) and the nearby bridge became known as the Ponte Sant’Angelo (Bridge of Angels).

The Church in Rome received two gifts that day. The disease of the city was cured and a new prayer was established to help remind the faithful of joy even in times of great suffering.

The Regina Caeli is a few-second way to get a little taste of heaven and keep the Easter joy alive, especially in our trying times.

Queen of Heaven, rejoice, alleluia.
For he, whom you did merit to bear, alleluia.

Rejoice and be glad, O Virgin Mary, alleluia.
For the Lord is truly risen, alleluia.

Let us pray: O God, who gave joy to the world through the resurrection of thy Son, our Lord Jesus Christ, grant we beseech thee, that through the intercession of the Virgin Mary, his Mother, we may obtain the joys of everlasting life. Through the same Christ our Lord. Amen.

Read more:
This prayer sounds like it was written by preschoolers, but the Church wants us to say it daily

Read more:
Need a taste of Heaven and a shot of joy? Try the very short Easter prayer.