Trasmoz: The only cursed, excommunicated town in Spain 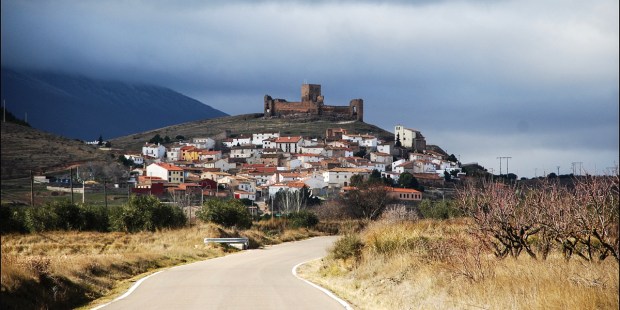 Legends about witches and covens have been woven around this town since the Middle Ages.

These days, only 62 people live in Trasmoz. The days in which the town was home to more than 10,000, back in the 13th century, are gone. Located in the province of Zaragoza, on the slopes of the Moncayo massif and very close to the Cistercian Monastery of Veruela, the village was officially excommunicated when the castle of Trasmoz was accused of being a safe haven for witches and wizards.

The story, in fact, is a bit more complex. Some say at that time an intricate operation of counterfeiting was carried out in the castle and those who were responsible, in order to keep the curious at bay, also forged these legends about witches by brewing potions at midnight, dragging chains around the castle and lighting fires in its towers.

The whole scheme worked so well that, since then, Trasmoz has been practically synonymous with witchcraft.

Other sources make the case a complex political issue. In the 13th century Trasmoz was also an important reservoir of silver, with valuable resources of water and wood. But, moreover, it was secular territory: by royal decree, its lands were not property of the Church and the whole village was exempt from paying taxes to the Monastery of Veruela.

Stories about witchcraft in the castle only exacerbated this already tense relationship between the monastery and the neighboring village. Eventually, the archbishop of Tarazona excommunicated the entire town. However, far from settling the dispute for good, this only meant the tensions increased.

After the excommunication, the monastery began to use the waters of Trasmoz. Obviously, this did not please the Lord of Trasmoz, Pedro Manuel Ximenez de Urrea, who decided to take up arms against the monastery itself. But before there was any bloodshed, Ferdinand II ended up supporting Trasmoz.

This, of course, did not please the archbishop. With the support of Pope Julius II, Trasmoz was officially cursed, with the archbishop reciting Psalm 109 as a spiritual weapon against the village. The year was 1511. Since the curse had papal approval, only the pope can lift it.

So far, no pope has.

By 1520, curiously, things were not going well in Trasmoz. The castle was burned down, and almost completely ruined. After the expulsion of the Jews from Spain, the town went from having almost 10,000 inhabitants to only 70. Today, Trasmoz has no schools, no shops and there is only one bar-restaurant. But, of course, they do have their own witchcraft museum, in the castle’s ruins.