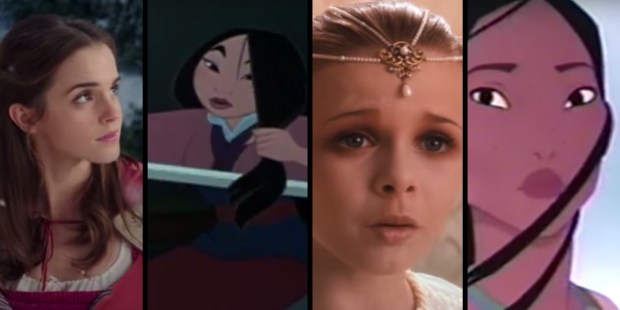 Here are some beautiful-on-the-inside role models to inspire your little girl.

Everyone wants to be a princess. Well, not everyone. I, for one, have no desire to be a princess. But if you’re a girl of a certain age and of a certain persuasion, being a princess is where it’s at. Go to Disneyland, and you’ll see dozens, nay, hundreds of little princesses, all about three feet high and all dressed to the nines: Belle, Cinderella, Jasmine, Tiana … they’re all well-represented there. (I’m sure The Little Mermaid’s Ariel would have more representation if her fans could just figure out how to stand in line while sporting a fish tail.)

But we parents understand that real princesses — or, at least, the sort of princesses we want our daughters to aspire to be — aren’t just born. It takes more than a pretty dress and a sparkly tiara to make one. Any princess worth her glitter has to be beautiful on the inside.

A plethora of princesses will be newly sashaying across a variety of streaming services this month, offering their royal graces on Netflix and Hulu. And many of them show their young viewers how to be a princess — a real princess, full of courage and hope and understanding and, yes, love. Here’s a sampling of some of them…

Belle doesn’t start out as a princess. She’s simply the bookish, beautiful daughter of an inventor who wants something more for her life than to meekly settle down with Gaston, the town’s local oafish hero. But when her father disappears in the forest and Belle goes off to search for him, she discovers a cursed, crabby, and seriously furry prince. With a little courage and a whole lot of love, Belle winds up transforming not only the Beast and her own life, but the lives of almost everyone she knows.

Perhaps your own little girl can’t transform the family teapot into an Oscar-winning actress, but whenever a child displays the kind of courage and heart that Belle does, she can change the world around her for the better. And that’s a valuable message indeed.

When the Huns come to visit, you don’t mess around. Everyone in China knows that. So when a Hun army invades the Middle Kingdom, every family is expected to send a man to the front — even if that man is needed much closer to home. That doesn’t sit well with Fa Mulan, given that her elderly father probably wouldn’t survive another war. So she steals her dad’s armor and heads off to battle instead.

Now, admittedly, most parents wouldn’t want their kids heading off to war in duds pilfered from your closet. But Mulan — based on a real Chinese folk hero — displays courage, love, and loyalty aplenty here. You’d be hard pressed to find a more heroic princess.

The Childlike Empress may look like a little girl, don’t let her delicate features fool you. She’s impossibly old and pretty essential to the goings-on in the land of Fantasia. She rules her domain with a gentle hand and a pure heart. But now, she and her land are under assault from a terrible force called “The Nothing,” which threatens to literally swallow up the whole place. Turns out, only one thing can save the Empress and her magical realm is imagination.

Read more:
4 Movies (streaming right now) that will inspire your teens to stand up for what’s right

The Empress (played by Tami Stronach) sticks mainly to the background of this dated but still-beloved fantasy classic. But the secret that she holds — that imagination has the power to not only save a world, but create new ones — is an important one. Our world places a premium on concrete skills, and well it should. But those things are most effective in the service of big dreams, and we should always encourage our children to dream big.

Change comes, whether we like it or not. And for the Powhatan tribe, change has come by boat. A bevy of English settlers have landed on what will become the coast of Virginia in 1607, hoping to start a new life and (hopes evil Governor Ratcliffe) steal new wealth. But the settlers don’t exactly endear themselves to the Powhatan: Soon, these new Americans and Native Americans are on the verge of war. It takes princess Pocahontas and her new friend, Captain John Smith, to convince everyone to set aside their weapons and live in peace.

If your children are cramming for an early American History exam, Disney’s Pocahontas is not the movie to watch. But what it lacks in historical accuracy it makes up in heart, giving us a heroine who manages to bridge a gigantic cultural chasm. This movie values diversity in the best of ways, and for a story that takes place 500 years ago, its message couldn’t feel more timely.

Our fairy tales once told us that you can detect a princess by having her sleep on a stack of mattresses and seeing whether she can detect a pea stuffed at the very bottom. But the movies tell us something else — and something much more positive, I think: It’s character that matters.