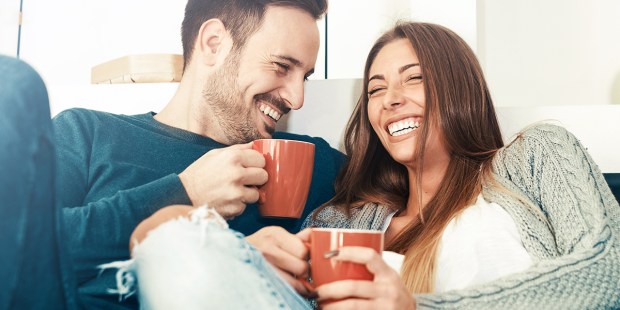 There’s a danger in predicting your future after marriage.

“Oh, I’m going to be a stay-at-home mom,” one woman said, surrounded by other women at brunch.

They all nodded, giving their approval, which so many women seek these days.

I get it. We want to acknowledge the value in staying home, in foregoing apparent worldly success in order to give day-in and day-out to one’s family. Because for all the advancements feminism has brought women, greater recognition of caregiving and homemaking hasn’t been one of them.

But what if in proclaiming their desire to be stay-at-home-moms (SAHMs), women think they’ve rejected modern feminism when they’ve actually given into it?

This wasn’t the first time I’ve heard single, childless women proclaiming their desire to be SAHMs, and I even used to do it myself on occasion. But after getting married, and having my son last year, I realized one fatal feminist flaw in these proclamations: they leave out the husband.

Much of modern feminism champions women in creating their own destiny, breaking down any glass ceilings in their way to becoming leaders, independent and fierce. This narrative is rooted in independence — encouraging women to go after “what you want,” but also creating an expectation that women should envision and create an “ideal destiny” — for themselves to pursue.

Read more:
Women Don’t Want No Stinkin’ Equality – At Least When It Comes to Work

So young women reflect on who they are, and what “ideal destiny” they believe they want. For some, that “ideal destiny” is being a stay-at-home mom. Whether because they just really love kids or homemaking, or they want to be holy and think staying home is the holiest way for wives to live, this desire can come from a place of selfishness, or selflessness, or somewhere in between.

But the truth is, marriage is a vocation of two — not one. And I think there’s a danger in women creating their own “ideal destiny” to hold as an expectation over their future marriage. Because until you meet the man you’re going to marry, you really don’t know what exactly your marriage is going to look like …

What if he’s a lawyer who has a high salary but an unpredictable schedule?

What if he’s a writer and a calm disciplinarian, but has no health insurance?

What if he has a mental or physical illness that makes working full-time difficult or unstable?

What if he longs to be a medical missionary, and travels frequently to care for those in poverty?

What if he is also supporting his single mom, who finally left her abusive marriage last year?

What if he desires to stay home with kids himself?

The point is, marriage is about uniting your life with someone else. It involves dying to yourself and your independence, for the sake of something deeper, more beautiful, and powerful — your ideal vocation.

The vocation that will make you holy; the vocation God is calling you to, regardless of whether or not it seems “ideal” at first.

But it should always be about giving … giving yourself away. To those people God is calling you to love.

That’s what is so powerful about Mary’s example. Not that she was a SAHM and therefore all women should aim to be SAHMs, but because she said YES … to where God called her. It wasn’t about what “kind” of mom she was going to be. She responded to the call God placed in front of her. And I would bet it didn’t look the way she had imagined.

Read more:
How to slow down your fast-paced life

Just as with Mary, your saying “yes” will necessitate that you put your identity in God, above your public identity — whether that’s at the family function where in-laws are asking if you’ve ever “going to put that degree to use,” or back-to-school night where someone mentions how badly they feel for kids who go to after-school-care. Because God has called you into a marriage, first and foremost. And I don’t know the details of all that entails. But God does.

We’ve come a long way for women in terms of learning that they can be either stay-at-home moms, or working full time, or part time, or some combination of those.

Now we just need to remember to make marriage part of the conversation, too.

This article originally appeared on FemCatholic and has been tweaked and reprinted here with permission.