Traveling to Lourdes? Go out of your way to visit St. Bernadette’s incorrupt body 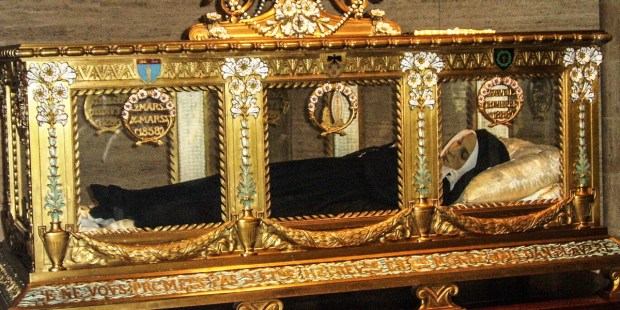 She suffered so deeply in life, but the sweet expression on her face reflects her eternal joy.

Every year, five million people go to Lourdes as pilgrims, but “only” half a million go to the convent of the Sisters of Charity and Christian Instruction 438 miles away in Nevers, the geographical heart of France.

Bernadette sought that convent to avoid the attention that would undoubtedly have surrounded her in the small town where she was born and where, from February 11 to July 16, 1858, she saw Our Lady 18 times.

Though train travel was possible, in the 19th century the great distance separating the two locations seemed a formidable deterrent, which would protect Bernadette as she sought God’s love in solitude. Even so, thousands of people went to visit her in her new state of life as a consecrated soul.

Bernadette arrived in Nevers in 1866, and never returned to her hometown, dying on April 16, 1879, at the age of 35. Catholic author Marcelle Auclair, when writing the saint’s biography based on records of her testimony and her writings, documented what is known as Bernadette’s spiritual testament (see below).

That is an appropriate term, because the text reflects the effects of the suffering she bore, caused by poverty and hunger as well as by the insults and incomprehension of others, no less frequent among her companions in the convent than in her home town.

Saint Bernadette, after becoming Sister Mary Bernard, spoke of the apparitions only once in the presence of the other sisters, and her superior never permitted the subject to be spoken of again inside the cloister, in order not to create a distraction in the life of the convent, and above all to allow the young novice to continue her path to the Lord in peace.

In 1867, Bernadette made her religious profession, and spent her religious life doing different kinds of work in the convent — sometimes the most strenuous tasks of cleaning and helping in the infirmary — although she became progressively weakened by asthma and tuberculosis.

When Bernadette’s coffin was opened in 1909, 30 years after her death, the examiners found her body incorrupt. She was found incorrupt yet again in 1919 and 1929.

The rosary wrapped around her hands had rusted and decayed, and her habit was in ruins; nonetheless, her liver, usually one of the first organs to decompose, was intact, as were her teeth and fingernails. Some bodily liquids were even found in her remains.

This is the description given by the doctors C. David and A. Jourdan of what they found during the first exhumation:

The coffin was opened … We did not perceive any odor. The body was dressed in the habit of the order, which was damp. Only the face, the hands, and part of the forearms were exposed. The head was inclined to the left, and the face was pale white. The skin clung to the muscles, and the muscles adhered to the bones. Her eyelids, somewhat sunken, covered her eyes. The nose was shriveled and narrow.

Her mouth, slightly open, allowed us to see that her teeth were still in place. Her hands, crossed over her chest and perfectly preserved with the fingernails, held a rusting rosary. The veins on her forearms stood out. Her feet, like her hands, still had the toenails intact.

After having removed her habit and the veil from her head, her whole body could be seen, shriveled, rigid, and taut in every limb. Her hair, which was short, was seen to be still on the head and connected to her scalp; her ears were perfectly preserved; and the left side of her body, above the waist, was higher than the right. The lower parts of the body were slightly blackened; this seems to be due to the carbon which was found in great quantities in the coffin.

In 1925, the body began to be shown publicly, first in one of the gardens of the convent and later in the chapel. Her hands and face were covered by a thin layer of wax, which was applied to cover the discoloration.

The appearance of the saint impresses visitors with the sweetness of the expression on her face. A statue of Mary stands in the chapel near Bernadette’s feet, evocative of the fact that her soul now converses freely with Our Lady in heaven as she did on earth those 18 times more than a century and a half ago.

Read more:
“Tracking Mary”: How to teach your children about the Marian apparitions

For the poverty in which Mom and Dad lived, for the failures we experienced, for the ruin of the mill, for having had to take care of children and keep watch over orchards and sheep, and for my constant tiredness … I thank you, Jesus.

I thank you, my God, for the prosecutor and the police commissioner, for the policemen and for the harsh words of Fr. Peyramale …

I will not know how to thank you, except in paradise, for the days on which you came, Mary, and also for those on which you did not. For the slap I received, for the ridicules and insults I suffered, for those people who thought I was insane, and for those who saw me as an impostor; for the person who tried to turn it into a business … I thank you, Mary.

For the spelling I never learned, for the bad memory I always had, for my ignorance and for my stupidity, I thank you.

I thank you because, if there had been a more ignorant and stupid child on the planet, you would have chosen her.

For the fact that my mother died far away, for the sorrow I felt when my father, instead of embracing his little Bernadette, called me “Sister Mary Bernard” … I thank you.

I thank you for the heart you have given me, so delicate and sensitive, which you filled with bitterness.

For the fact that Mother Josefa announced that I’m good for nothing, I thank you. For the sarcasm of Mother Superior, for the hardness of her voice, for her injustices, for her irony, and for the bread of humiliation … I thank you.

Thank you that I have been as I am, such that Mother Theresa could say of me, “Never give her enough.”

I give thanks for having been privileged in having my defects pointed out, and for the other sisters being able to say, “What luck that I am not Bernadette!”

I thank you that I have been the Bernadette who was threatened with imprisonment because I saw you, Mother … I am thankful that I was a Bernadette so poor and miserable that, when they saw me, people said, “That thing is her?” The Bernadette whom people looked at as if she were the strangest animal.

For the body you gave me, worthy of compassion, and decayed … For my illness, which burns like fire and smoke, for my rotting bones, for my sweats and fever, for the intense and dull pains I feel … I thank you, my God.

For the soul you gave me, for the desert of my interior dryness, for your dark nights and your lightening bolts … for everything. For you, when you were present and when you were absent … I thank you, Jesus …

More on her appearance in Banneux, Belgium

The only officially recognized Marian apparitions in the United States