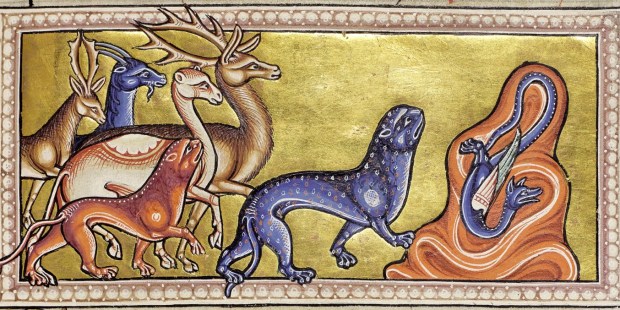 You wouldn’t think a sea urchin could teach you how to be humble, would you?

Simply put, a bestiarum vocabulum (that is, a bestiary), is a collection of beasts whether real or imaginary. The earliest known bestiary is the Physiologus, an anonymous Greek text dating to the 2nd century, that became quite popular during the Middle Ages. The Physiologus included commentaries from Aristotle and Pliny the Elder on zoology. It served as a primary source for the work of later writers, such as St. Isidore of Seville and St. Ambrose, who would then associate certain moral virtues (and vices, of course) with various animals, based on references in Scripture, tradition and other literary sources. For instance, the pelican ended up being associated with the figure of Christ, as the Physiologus stated that this bird would open its breast with its own beak to feed its young with its own blood (or to bring them to life, according to some other versions).

The Aberdeen Bestiary is probably the most beautiful medieval bestiary of them all. Written and illuminated in England around the year 1200, it is encrusted with gold leaf and its illuminations are exceptionally rich in detail. The best part of it (for us, today) is that the University of Aberdeen in Scotland, which has kept the book since the 17th century, has now finished digitizing the whole manuscript, the result of a painstaking work that started back in 1996. Thanks to their work, you can now read with your own eyes what the Aberdeen Bestiary has to say about, for instance, the panther:

There is an animal called the panther, multi-colored, very beautiful and extremely gentle. Physiologus says of it, that it has only the dragon as an enemy. When it has fed and is full, it hides in its den and sleeps. After three days it awakes from its sleep and gives a great roar, and from its mouth comes a very sweet odor, as if it were a mixture of every perfume. When other animals hear its voice, they follow wherever it goes, because of the sweetness of its scent. Only the dragon, hearing its voice, is seized by fear and flees into the caves beneath the earth. There, unable to bear the scent, it grows numbed within itself and remains motionless, as if dead. Thus our Lord Jesus Christ, the true panther, descending from Heaven, snatched us from the power of the devil. And, through his incarnation, he united us to him as sons, taking everything, and “leading captivity captive, gave gifts to men” (Ephesians, 4:8). The fact that the panther is a multi-colored animal, signifies Christ, who is as Solomon said the wisdom of God the Father, an understanding spirit, a unique spirit, manifold, true, agreeable, fitting, compassionate, strong, steadfast, serene, all-powerful, all-seeing.

You can read more about the Aberdeen Bestiary here, and you can visit the bestiary online by clicking here. Also, don’t forget to check out the video below to take a quick look at the book itself.