The story behind “The Mass of Saint Basil” painting 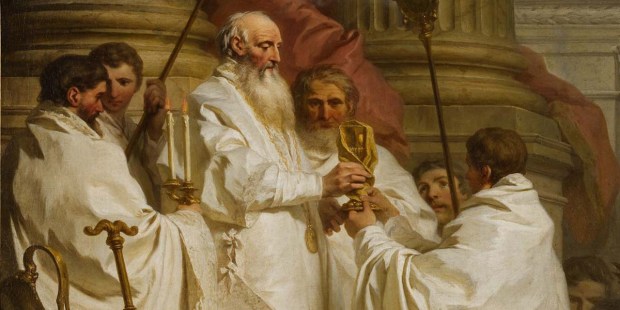 Pierre Subleyras’ work can be read as a brief treatise on 18th-century politics.

Pierre Subleyras, although born in France, spent most of his professional life in Italy, as he moved to Rome to work for Cardinal Valenti Gonzaga and Pope Benedict XIV, among others. In fact, he is often referred to, even among art historians (and particularly by specialists in sacred art) as “Pietro” Subleyras, the “italicized” form of his French name, Pierre. After a short stay in Naples in search of a much needed break from work – biographers would agree he was “exhausted by overwork,” a featured shared with some of the great figures of the history of art, Michelangelo in capite –– he went back to Rome, where he died.

A master of the late baroque and early Neo-Classicism, Subleyras counts among his best-known works the majestic altarpiece of St. Basil the Great in St. Peter’s Basilica. “The Mass of Saint Basil,” originally a painting, was turned into a mosaic by another artist, Pier Leone Ghezzi. There are also several different sketches and modelli of this final, definite piece, which show Subleyras’ exceptional painting skills. One of them, for instance, is in the collection of New York City’s Metropolitan Museum of Art.

When describing this image, most texts would focus almost exclusively on St. Basil, explaining that he was so involved in his devotion while celebrating Mass — the image represents the saint receiving the chalice, just before its consecration — that he didn’t even notice the emperor Valentius was in the room. The scene, by the way, is supposed to be based in historical facts. But there’s more to this.

In fact, while the saint’s absolute concentration in the liturgy is indeed the main element of the whole composition, the figure of the emperor is just as important, for a single reason: Valentius was an Arian, a heretic, and the moment he witnesses Basil’s devotion, he faints, miraculously moved by the solemnity of the rite. The place in which the emperor is depicted — in a lower position with respect to that of the saint, and also surrendering himself to the Mass — has led several scholars to assume the artist is proposing a political thesis: that of the submission of political power to ecclesiastical power. But that’s not exactly the case.

In fact, Basil did not manage to convert the emperor from Arianism to Orthodoxy, nor did he succeed in having him submitting his authority to that of the Church. But it seems Valentius was impressed enough with Basil to donate some land for him to build the “Basiliad”: a complex that included a hospice, a hospital, and the equivalent of one of our contemporary soup kitchens. This gesture, according to some historians (including some biographers of St. Basil himself) was crucial, as it helped determine the limits of state power over the Church, eventually leading – centuries later — to what we know as the separation of State and Church.