Witold Pilecki: The man who volunteered to be imprisoned at Auschwitz 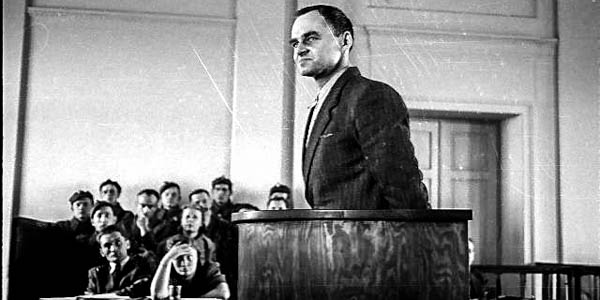 Leaving behind everything he loved on earth, he “entered something seemingly no longer of it.”

Witold Pilecki was a Polish cavalry officer and a devout Catholic. He bears the distinction of being the only person who ever voluntarily sought to be captured and sent to the Nazi concentration camp at Auschwitz.

Before World War II, Pilecki was happily married to schoolteacher Maria Pilecka (née Ostrowska) and the attentive father to their two children, Andrzej and Zofia, who are still alive. Pilecki cared deeply about the welfare of his community: he established an agricultural cooperative, helmed the local fire brigade and also served as chairman of a milk-processing plant. In 1932, he founded a cavalry training school. He had fought in the Polish-Soviet War of 1919–1921 and the 1920 Polish-Lithuanian War.

Pilecki led a platoon of cavalrymen against the August 1939 Nazi invasion of Poland. After his platoon was decimated, the survivors joined the infantry. Commanded by Major Jan Włodarkiewicz, the men destroyed seven German tanks and three planes – one in the air and two on the ground. On September 17, the Soviet Union invaded eastern Poland, and Pilecki was seriously wounded in the heavy fighting.

After Poland formally surrendered on September 27, 1939, Pilecki and his fellow soldiers did not give up. Włodarkiewicz and Pilecki founded the Secret Polish Army (Tajna Armia Polska, TAP), later incorporated into the Home Army. To avoid suspicion, Pilecki worked as a manager of a cosmetics storehouse while organizing the underground resistance force of 8,000 men.

In 1940, Pilecki presented his superiors with a plan to enter the Auschwitz concentration camp, gather intelligence and organize inmate resistance. Little was known of what transpired in the compound, and people thought it was merely a large prison. They had no idea that it was an extermination camp where 1.5 million people were to die.

Pilecki’s superiors approved his plan. Under the false identity of Tomasz Serafiński, Pilecki allowed himself to be captured by the Germans along with 2,000 civilians on the streets after curfew. Of this day, he wrote:

“I bade farewell to everything I had hitherto known on this earth and entered something seemingly no longer of it.”

At Auschwitz, while working as a slave and battling pneumonia, Pilecki organized the  Union of Military Organizations (Związek Organizacji Wojskowej, ZOW), looking after prisoners and training them to take over the camp if external forces could break in to support their uprising.

Using a secret radio transmitter, ZOW broadcast information that was forwarded to the British government by the Polish resistance. The compilation has become known as Witold’s Report.

The Nazis began to identify and kill ZOW members. Meanwhile, the Home Army and the Allies judged it impossible to attack the camp. Pilecki decided to break out of Auschwitz and convince resistance leaders that a rescue mission was viable. On April 26, 1943, while working in a camp bakery beyond the fence, Pilecki, Jan Redzej and Edward Ciesielski overpowered a guard and escaped.

After losing several scouts, the Home Army decided they could not liberate Auschwitz without Allied assistance. The Soviet Army encamped nearby was not interested in helping the Poles.

In 1944, Pilecki was in the thick of the Warsaw Uprising, at first serving as a common soldier without disclosing his rank. The Soviet Army waited outside Warsaw, allowing the Nazis to kill more than 100,000 Poles. After Nazi Germany was defeated in May 1945, Pilecki joined the Polish Armed Forces in the West, loyal to the Polish government-in-exile.

Ordered back to Poland in 1945, Pilecki reported on conditions under Soviet occupation. For almost two years, he lived under assumed identities again as he gathered intelligence. In July 1946, he was told that his cover was blown and ordered to leave Poland, but he demurred. He began to catalogue Soviet atrocities.

On May 8, 1947, Pilecki was arrested and tortured by Poles loyal to the Soviet Union. He told his wife: “I cannot live. They killed me. Because Oświęcim [Auschwitz] compared with them was just a trifle.” A year later, he was sentenced to death, upon which he said, “I’ve been trying to live my life so that in the hour of my death I would rather feel joy, than fear.”

The last friend who saw him alive was Home Army chaplain Father Jan Stepien, himself imprisoned by the Soviets. Forty-seven-year-old Witold Pilecki was executed by gunshot on May 25, 1948, at Mokotów Prison in Warsaw, declaring with his last breath, “Long live free Poland!” Chief Rabbi Michael Schudrich of Poland wrote: “When God created the human being, God had in mind that we should all be like Captain Witold Pilecki, of blessed memory.”