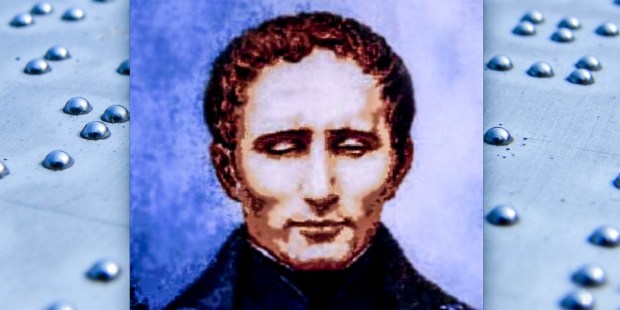 He invented braille reading and writing using the same tool that had cost him his sight.

Everyone knows the deaf Catholic classical composer, Beethoven. But did you know that the inventor of braille was also a brilliant musician and devout Catholic?

Louis Braille was born to a leatherer in the small French town of Coupvray. At the age of three, Braille — trying to mimic his father — picking up an awl to bore holes in a scrap of leather. Squinting closely, he pressed the awl down hard and it glanced off the leather, piercing his eye.

No treatment could be found, and the child suffered terribly as his eye became infected. The infection spread to his other eye. By age five, he had become completely blind. “Why is it always dark?” he kept asking his parents, not realizing that he would never see again.

His father carved canes for him and taught him how to navigate independently. The teachers and priests of Coupvray were impressed with Braille’s precocity and perseverance, recommending the 13-year-old Braille to the Royal Institute for Blind Youth, one of the first schools for the blind in the whole world. The Institute was founded by philanthropist Valentin Haüy, who was not blind.

The pupils learned to read using raised letters in a system created by Haüy. However, it was a laborious process to produce the books, and when the school first opened, it had only three. The children were also unable to write using such a system. Braille’s father made him an alphabet of thick leather, so that he could write home by tracing the letters.

At the age of 12, Braille had learned of a communication system of dots and dashes impressed into paper, devised by Captain Charles Barbier for soldiers to disseminate information by night without speaking or using light. It had been rejected by the military for being overly complicated.

For three long years, Braille worked assiduously at developing a similar, simpler system for the blind, using an awl, the very tool that had blinded him. He stated, “Access to communication in the widest sense is access to knowledge, and that is vitally important for us if we [the blind] are not to go on being despised or patronized by condescending sighted people. We do not need pity, nor do we need to be reminded we are vulnerable. We must be treated as equals – and communication is the way this can be brought about.”

Finally, after some revisions, Braille created an alphabet for the blind around the time he turned 15. He published it five years later, expanding it to include geometric symbols and musical notation. Braille was deeply passionate about music, being a talented cellist and organist. He was the church organist at the Church of Saint-Nicolas-des-Champs in Paris from 1834 to 1839, and later at the Church of Saint Vincent de Paul. Braille was invited to play the organ at churches all over France.

When Braille completed his studies, he was invited to remain as a teacher’s aide. He was appointed a professor at the age of 24. Braille taught history, geometry and algebra at the Institute for most of his life.

Yet Braille’s writing system was not accepted at the Institute. The successors of Haüy were hostile to this invention and dismissed the headmaster Dr. Alexandre François-René Pignier for having a history book translated into braille.

Braille died of tuberculosis at the age of 43. Two years after his death, his system was finally adopted by the Institute at the insistence of students. It spread throughout the French-speaking world.

The first pan-European conference for teachers of the blind was held in 1873. The blind British physician Dr. Thomas Rhodes Armitage advocated for braille at this conference, and it began to grow in popularity worldwide. Director of the California School for the Blind Dr. Richard Slating French said: “It bears the stamp of genius, like the Roman alphabet itself.”

Now, almost two centuries since Louis Braille began to join the dots, braille remains an important tool of communication. It is found on our elevator buttons and public signs. Braille has even made its way into computer technology, with RoboBraille email and the Nemeth Braille Code for Mathematics.

T.S. Eliot wrote: “Perhaps the most enduring honor to the memory of Louis Braille is the half-conscious honor we pay him by applying his name to the script he invented – and, in this country [England], adapting the pronunciation of his name to our own language. We honor Braille when we speak of braille. His memory has in this way a security greater than that of the memories of many men more famous in their day.”

When you spy a sign in braille, say a prayer for the man who created it, turning his childhood tragedy into a blessing for millions of people for whom it is “always dark.” May perpetual light shine upon Louis Braille.

Read more:
The Catholic doctor who invented the stethoscope