What does a happy death look like for you? 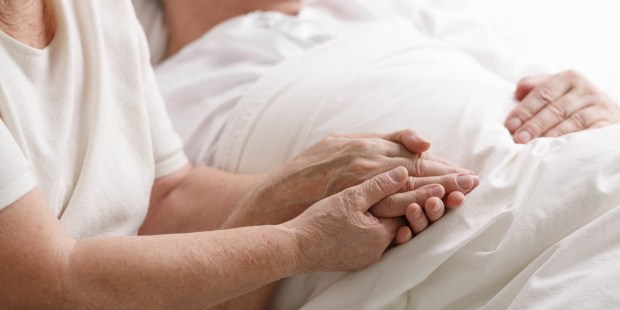 No one likes to suffer, but there’s a great gift in it that we may be overlooking.

One of my friends always prays for a “happy death,” and for a long time I thought that was a weird and oxymoronic thing to pray for. I mean, death is death, right? It’s always sad, even when it’s expected.

But I’ve been thinking more and more about what a happy death would look like for me, and I’m surprised by the way my thinking has shifted. Instead of a knee-jerk desire for a quick and painless death, I’ve begun to realize that what I want most is time to prepare for saying goodbye to the people I love.

In the controversy about the growing euthanasia movement, there’s a lot of focus on suffering and quality of life. But what’s getting lost in the focus on the experience of death is the understanding of what death is — the last chapter of a person’s life. A Canadian doctor helped refocus on the person with a recent editorial in the Edmonton Journal about his patient Ann, who showed him the opportunity for growth and resolution that’s inherent in dying naturally.

Ann reflected on the consequences she has heard about in the families of patients with terminal illness who have opted for euthanasia. “Unresolved circumstances and relationships were left to fester in the wake of their death,” she said. “I have often seen that the period of declining health has been a time of healing of relationships and teaching important values.” That time is always cut short with euthanasia.

“My relatively brief journey with terminal cancer has already resulted in deepening of some of my relationships and steps toward reconciliation taken by a family member who has been estranged for a number of years. If I had chosen euthanasia, this resolution and growth would not have been available to these ones who will live on after I have died.”

This is a beautiful reminder that one person never exists in isolation. Death doesn’t just happen to the person who dies, it affects everyone they leave behind. A quick and painless death might be physically easier for me, but it would be a shocking blow to the people I love the most.

It’s true that any kind of death will be painful to our loved ones, as it’s painful when we lose the people we love. But a happy death would be one where there’s time to heal old wounds, to show more love, and to say goodbye. It wouldn’t stop the pain of loss and grief, but it might prevent the regret and sorrow of things left unsaid and undone.

Time isn’t always guaranteed. There’s no way to know how or when death will come, but that shouldn’t stop us from preparing now for an uncertain future. We can start finding ways to love the people in our life right now, so that if death comes unexpectedly we don’t have a pile of regrets stored up.

I’ve always wanted to write my children letters for their futures, to help them get through tough times. But daily life is insanely busy and I’m running under the assumption that I’ll have plenty of time later.

If there is no later, there will be so many things I could have said and never did. Things my children will never hear because I didn’t make the time to say or write them now; things they will never know or will have to learn because I didn’t tell them.