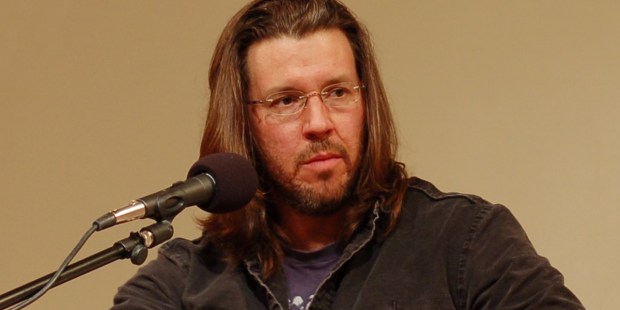 The late novelist David Foster Wallace[1] (1962-2008) left the world two novels, several books of short stories and a number of essays. He also left a justly famous commencement speech to graduates at Kenyon College (2005) entitled “This Is Water.” The speech is remarkable not only because it paints a picture of everyday adult life as only a novelist can, but also because it strives towards a kind of sanctification of the everyday—of the grocery store and freeway experience—that is profoundly moving and borders on the Catholic sacramental imagination. Wallace’s point is that the education received in college is not so much to teach us how to think, but to teach us that we can choose to think and focus on something other than ourselves and how the world affects me at any particular moment. This movement from self-centeredness to contemplation of others (their needs, their day, how things affect them) is the beginning of true freedom: “The really important kind of freedom involves attention, awareness and discipline, and being able to truly care about other people and to sacrifice for them over and over in myriad petty, unsexy ways every day.” Contemplation supports freedom and freedom is defined by one’s everyday efforts on behalf of others. Why is this “freedom”? For Wallace, attention to others liberates because it releases us from self-concern, from a focus on the self, bound to get ensnared in comparisons with others, in useless insecurities, in the entire world of the “rat race” that pronounces what we ought to be worried about and striving for. Wallace emphasizes that most days, this liberating attention will be difficult to accomplish and, some days, you “just won’t want to.”

Pope Paul VI[2] observed the continuity between the Second Vatican Council’s “universal call to holiness” and the writings of Saint Francis de Sales (1567-1622), especially clear in his beautiful book, Introduction to the Devout Life.[3] There, at the prompting of a female friend, he lays out the meaning of a “devout life,” its availability to all and the method or discipline for getting there. Like Wallace, Francis knew that such a life required contemplative attention and discipline, but also that it could result in great joy. This joy in devotion, he argued vehemently, should not be restricted to monks and priests, but available to all. Indeed, he says that he writes the book “to teach those who are living in towns, at court, in their own households, and whose calling obliges them to a social life, so far as externals are concerned.” There is a temptation, he thinks, to despair of any possibility of living a holy life in the world, as it were. Like Wallace, Francis recognizes the difficulty. Unlike him, he does not think that the holy life is a mere choice or result of effort, though both will certainly be involved. Like Wallace, Francis sees the possibility for devotion in the ordinary affairs of life. The normally elegant writer here does not mince words: “It is an error, nay more, a very heresy, to seek to banish the devout life from the soldier’s guardroom, the mechanic’s work-shop, the prince’s court or the domestic hearth.” And, we might add, the grocery store and the freeway. How one lives a devout life will differ in each case: “A different exercise of devotion is required of each—the noble, the artisan, the servant, the prince, the maiden, and the wife; and furthermore, such practice must be modified according to the strength, the calling and the duties of each individual” (7).

What is this devotion then? In short, it is the perfection of the Love of God in the individual. For Francis, the love of God first pours into our hearts as grace, forgiveness, then moves us to charity, that is, to following the commandments of God including or especially love of neighbor, and perfects both of these with eagerness and diligence, with ease and graciousness, so that charity becomes a kind of joy hidden from the world. The world sees only the tedium of shopping and diaper changing and paper shuffling and emailing and cleaning dishes and cleaning the bathroom and making another dinner; “but the world sees nothing of that inward, heartfelt devotion which makes all these actions pleasant and easy” (p. 5) as part of one’s calling or vocation. This is the freedom that Wallace observes as a possibility amidst struggle. Indeed, for Francis, devotion is an always-incomplete struggle. This realization is crucial in staving off despair. For Francis, imperfections and temptations last until we lie on the underside of the grass. Perfection lies not in conquering these temptations and struggles, but in facing them squarely and contending against them. We are pilgrims, not conquerors; on the way, not arrived.

It may help here to bring in two further points. First, God’s love does not leave us without real support for our struggle — weapons of war, as it were. Francis illustrates the devout life by way of Jacob’s ladder: stairs ascend to union with God and descend to help for the neighbor; prayer seeks the love of God; sacraments grant it. We should avail ourselves of both. Second, the seeming insignificant tasks of the everyday are not beside the point, but are the point of the devout life. The kind rather than nasty email response changes the receiver’s day; the responsiveness of a mother or father to a child’s crying is transformative; the grocery shopping feeds the hungry. These are the tasks that mold us, that teach us not to count the cost (because we inevitably do), that wed the sacred love of God to the profane, that is, to the world, and make it over. It is not outside the mundane that we meet God, but rather it is in this world that we have the opportunity to make God’s love present.

Then, just possibly, in the apparent drudgery, we will experience life as what Wallace hopes for his audience: “not only meaningful, but sacred, on fire with the same force that made the stars: love, fellowship, the mystical oneness of all things deep down.”

[1] While I do not believe it mitigates any of the wisdom and beauty of his commencement speech, it is perhaps important to note that Wallace committed suicide. He suffered for many years with severe depression.

[2] I learned this from Archbishop Edward Egan in his preface to the English edition of Francis’s Introduction to the Devout Life, p. xvi.

[3] The final edition was published in 1619. The English edition I am using here is Saint Francis de Sales, Introduction to the Devout Life (New York: Random House (Vintage Spiritual Classics), 2002).