Why women compare themselves to each other 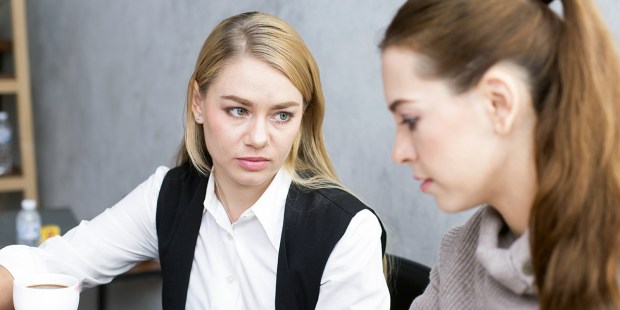 The only thing it accomplishes is depriving ourselves of happiness.

Not even a few months has gone by since the announcement of Meghan Markle’s engagement with Prince Harry, and there have already been dozens of articles comparing her style to Kate Middleton’s, or analyzing who could be “best” for the British crown.

I give this example because it’s about two famous women, but isn’t it so true that we women spend our time comparing ourselves? And it’s not healthy at all; in fact, it’s potentially dangerous.

Why? If you compare yourself to a man, you’re always going to have the gender difference as a justification or excuse, but when it’s another woman, you can find yourself asking the dreaded question: What does she have that I don’t have? And believe me, your interior self-saboteur can draw completely wrong or unfair conclusions that will damage your self-esteem.

Perhaps it’s got something to do with our past experiences of discrimination because of our gender or because we feel like we’re in a minority, so then we are in a constant competition to come out on top.

But if we think about it, what’s the use of comparing, for example, our body with another woman’s in the gym? That isn’t going to make us slimmer or in better shape; on the contrary, it can undermine your spirits and keep you away from your goal.

Yes, it’s true that for some, comparing themselves with other women can be a form of motivation, but then you can fall into the trap of not doing things for yourself, but just to beat or be better than someone else.

I think women sometimes waste too much time comparing ourselves to other women instead of using that time to do something productive and enriching with our lives and the lives of those around us.

And sometimes we’re so superficial (and I include myself in this) that we only compare ourselves in material things. We compare our finances, outfits, boyfriends, bodies, etc., but rarely do you hear a woman comparing her kindness or charity with that of another woman.

There is always going to be someone with better hair, a thinner body, longer eyelashes, more youth, whiter teeth, and more “likes” on Instagram (where, of course, you shouldn’t believe everything you see because sometimes it’s just a front), better luck, nicer skin, and so on and so forth. But have you ever stopped to think that there is always going to be someone in a worse situation than you?

Isn’t it better to give thanks for what you have than to live with a constant sense of dissatisfaction? Have you ever stopped to analyze objectively why that person has something you don’t have?

In the end, it’s about giving thanks, enjoying life, and working hard for what we want to change or improve.

Most of the time, comparing ourselves is a waste of time and energy. It’s a soap opera that only happens in your own mind.

Each woman is unique in her own way, and there will always be qualities that will make you special, so why get stuck on what you don’t have or self-sabotage your life unnecessarily when it’s already complicated enough?

Beauty, success, and all the rest come in different forms, so don’t pressure yourself to live up to an ideal of perfection that you probably only created on your own.

Don’t be so hard on yourself or on other women who you could be damaging by comparing them to others.

At the end of the day, we all have something wonderful and we are going to achieve more benefits if, instead of comparing ourselves, we inspire each other to reach the goal we have in common: happiness.

Read more:
Why Is It So Tempting to Compete With Fellow Women?

Read more:
The 7 bad habits that may be messing up your life