This is how Padre Pio died, according to nurse who was with him 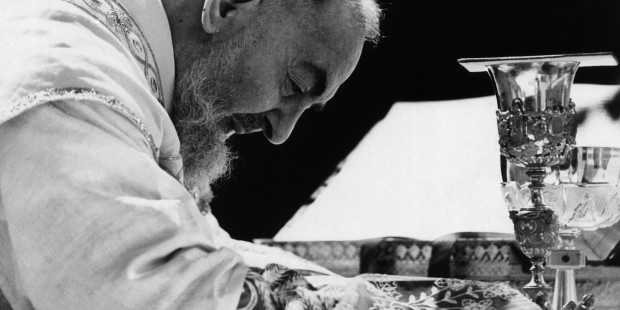 The only words the friar repeated were “Jesus, Mary, Jesus, Mary.”

On the night between September 22 and 23, 1968, in cell number 1 of the convent of San Giovanni Rotondo where Padre Pio lived, another man was also there. His name is Pio Miscio, a nurse at Casa Sollievo (“House of Relief”), and it was his shift at the hospital.

He ran to the convent with Dr. Giovanni Scarale, with the respirator that was supposed to help the saint of Pietrelcina to breathe. Thus, another name was added to the list of those who were present at Padre Pio’s death.

“Padre Pio died in the arms of Dr. Scarale,” says Miscio, with emotion. Once Padre Pio had died, Miscio continued his rounds through the unit to carry out his work as the nurse on duty (Tele Radio Padre Pio, February 23).

What happened during the night

It was close to 2 a.m. In Padre Pio’s cell were his primary physician, Dr. Sala, the Father Superior of the convent, and some friars. Padre Pio was seated in an armchair; his breathing was labored and he was very pale.

While Dr. Scarale took the tube out of the friar’s nose and held the oxygen mask to his face, Pio Miscio silently watched that dramatic scene.

Read more:
Padre Pio bore the stigmata, but one secret wound was more painful than the others