HOLY LAND. The Church of the Holy Sepulchre at Easter

The National Geographic Museum invites you to visit Christ’s tomb without ever setting foot in Jerusalem.

A ticket to the National Geographic Museum exhibit, “The Tomb of Christ: The Holy Sepulchre Experience,” comes with a warning:

This exhibition features a short 3-D film with active 3-D glasses. The exhibition is not recommended for guests susceptible to motion sickness or dizziness.

For good measure, as visitors to the Washington, DC, museum are ushered into a viewing room, they are advised that they may sit down if necessary, but that remaining standing allows one to feel the full force of the exhibit’s 3-D virtual reality experience.

Click “Launch the Slideshow” in the image below to view photos from the 3-D experience: 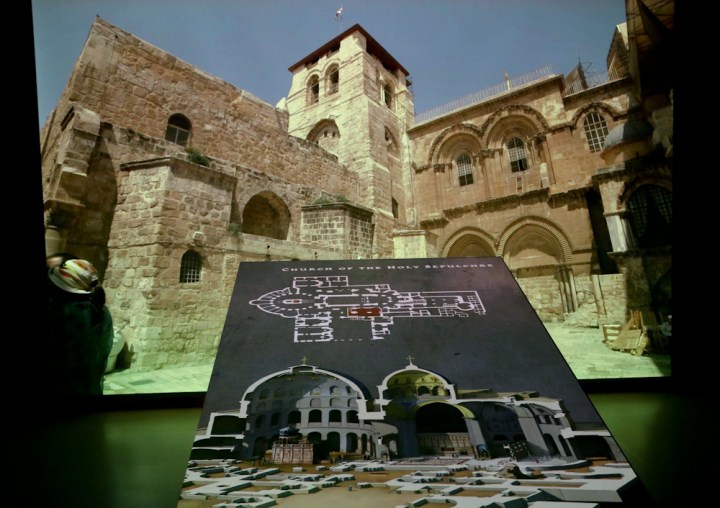 Indeed, once we put on our special glasses we had to resist the urge to find something to hold on to as we began to soar around the church built over the spot where Jesus died on Good Friday, almost 2,000 years ago.

To see the church from a bird’s eye view – a “bird” that swoops down for up-close inspections of this archaeological treasure – truly is the next best thing to being at what is one of the holiest sites in Christendom. Roman emperor Constantine built the church in 335 over the spot where Jesus was crucified, died, and was entombed. A convert to Christianity, Constantine had the church constructed after demolishing a Roman temple dedicated to the goddess Venus that sat atop Christ’s tomb.

Over the centuries, the church has been damaged and rebuilt as it witnessed the Persian capture of Jerusalem, the Crusaders’ Reconquest, natural disasters and a devastating fire in 1808. The church that stands today is managed and operated by six Christian orders: Greek Orthodox, Franciscan, Armenian, Coptic, Ethiopian, and Syrian Orthodox. Every year, half a million or more tourists and pilgrims visit the site, and it is the most popular site for Christian tourists to the Holy Land.

“Since not a lot of people get to go to Jerusalem, we hope that you feel like you are in the Church of the Holy Sepulchre,” said National Geographic Museum’s Lexie de los Santos, who told us that she had recently been told by a resident of Jerusalem who had been through the exhibit that she was grateful to be able to “see” the church without having to battle the long lines and crowds.

The exhibit was made possible as a result of 3-D imagery taken of the site during restoration conducted by the National Geographic Society and the National Technical University of Athens. The much-needed restoration project was completed in April of 2017, only a year after it had begun and without ever having to close the church to worshipers.

In addition to the 3-D immersive film experience, visitors pass through an exhibit on the archaeological and historical findings uncovered during the restoration process, and are invited put on another set of virtual reality goggles for a self-guided tour through all the nooks and crannies of the Church of the Holy Sepulchre.

Tickets are $15 and available for purchase at the National Geographic Museum, located at 1145 17th Street, NW, Washington, DC.