Camino in a wheelchair: Two best friends on a 500-mile spiritual pilgrimage 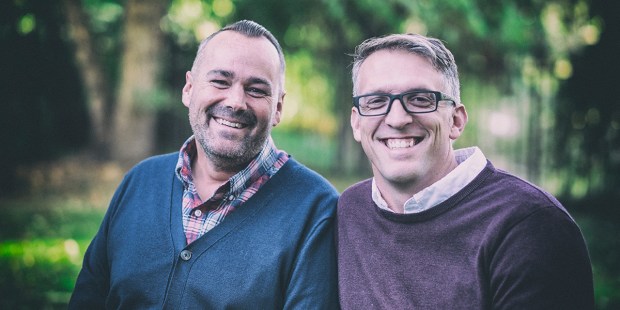 And what they learned about living life with a “Sabbath mentality”

Due to a progressive neuromuscular disease, Justin Skeesuck has lost the use of his arms and legs, and is now confined to a wheelchair. But that didn’t stop him from embarking on a pilgrimage with the help of his lifelong best friend Patrick Gray. And this wasn’t just any pilgrimage. It was the 500-mile Camino de Santiago – or Way of St. James – in the mountains of northern Spain.

During an interview on “Christopher Closeup” about their Christopher Award-winning book I’ll Push You, Patrick and Justin recalled the physical struggles they endured on their journey, but also the ways that God made Himself known to them along the way.

While watching a Rick Steves travel show about the Camino on PBS, Justin heard a voice inside him telling him, “You need to do this.” The book’s title comes from Patrick’s unhesitating response to Justin’s suggestion they go together: “I’ll push you.”

It might sound surprising that someone with diminished physical abilities could have such an adventurous spirit, but Justin credits a number of key people and factors with keeping him going: Christ, as the “cornerstone” of his life; the love of his wife Kirstin, who married him years ago knowing what was going to eventually happen to him; the love of his children, Jaden, Noah, and Lauren; and his friendship with Patrick, who has “lifted me up a lot and sometimes had to help me pull my head out of my butt.”

“It’s those relationships that I leaned on,” said Justin. “It was through those that my spirit has always been seeking the light and the best parts of the world, trying not to focus on ‘woe is me.’ I could easily curl up in a corner and wither away, but I choose not to. It takes a decision.”

Read more:
How a friendship between a business student and a janitor is changing a university campus

Patrick, on the other hand, credits Justin with improving his own attitude toward challenges. The two of them have a habit of focusing on the “why” of a particular goal instead of the “how.” That’s why Justin was quick to accept the physical challenges that would come with needing to push his friend through some incredibly rugged terrain.

“If the why of something is really important,” explained Patrick, “if you believe in it so much that you’ll pursue it come hell or high water, the how may not look pretty … but you’ll figure it out. You will make it happen because you believe in it. If we start with the details, we often get overwhelmed and never actually pull the trigger on something.”

Patrick and Justin encountered plenty of naysayers when they told others about their plan. Some called them “idiots or crazy.” But those comments just added “fuel for the fire,” making them determined to get it done. And despite the hardships, they’re glad they made the pilgrimage because it affected their views on God and human nature.

Justin said, “I came out of the pilgrimage with my eyes opened to so much good in this world that we don’t hear about on a daily basis … So many people stepped into our journey to help us along the way, either for a few moments or for several days. They would stay with us and help us get over these incredibly difficult situations. It’s like my faith in humanity was restored. There are so many great people with so much heart and joy in life, and to see that on a daily basis was truly God’s gift to us … The message we’ve taken away is that we are hands and feet for one another here on God’s earth.”

For Patrick, a big takeaway was his new appreciation for the concept of Sabbath, and what it means. While both the Old and New Testaments treat it as “a day set aside to honor God,” the original word means “to stop, rest, and keep.”

Patrick fully supports practicing the traditional day of Sabbath, but believes we can benefit from incorporating its larger meaning into our daily lives. Jesus, he notes, was persecuted by the Pharisees and Sadducees for breaking the rules of the Sabbath by performing healings and more. But Jesus was simply practicing Sabbath in a different way: “He was stopping the distractions, resting in the presence of the people around him and holding them close.”

“That is what we experienced over and over on the Camino,” continued Patrick. “Overall, it was a big, grandiose form of Sabbath for Justin and I to stop whatever distractions had been pulling us in different directions and rest in the presence of one another and the people that came alongside of us. Then to take that home and apply that same mentality to my family and friends opened up the playing field for how relationships can develop and become more intimate. When you approach life with a Sabbath mentality, more of a philosophy than just a specific day, it permeates every aspect of your life. Every decision you make becomes influenced by a willingness to rest in the presence of others and let others rest in your presence. As a result, vulnerability and intimacy flourishes. People tend to come together in a way that I believe Jesus called us to come together, where we are a community that is grounded in those three words: to stop, rest, and keep. Stop the distractions, rest in each other’s presence, and keep each other close.”

Read more:
A beginner’s guide to getting to know yourself more deeply, by St. Teresa of Avila

Justin has had to practice the vulnerability and intimacy Patrick references in a unique way because of his disease. But his disability has given him a strength grounded in humility that has also taught him a valuable lesson.

Justin explained, “When you deny someone the opportunity to help you, you deny them joy. Think about when you see somebody who needs help and you’re willing to step in … but they’re so resistant to [being helped], they’re actually robbing you of that joy of being there to be hands and feet for one another … Patrick has to do a lot of things that most best friends don’t do. He helps me in the bathroom and showers me and gets my clothes on and feeds me when we’re together. I can see how much joy it brings him to pitch in …Why would I want to rob him of that? That’s not cool … Once you let people in to help you, amazing things can happen … Love [and beauty] will flourish in this world when you allow that to happen.”

Read more:
What happened when two best friends walked the Camino with a wheelchair

Patrick also hopes that people who read I’ll Push You (or the new children’s book edition titled The Push) gain insight into the power of community and achieving seemingly impossible goals.

He concluded, “We often impose limitations on ourselves, ones that aren’t real because of fear, doubt, shame, or the history of our decisions or somebody else’s decisions that have caused a lot of negative things in our lives. I would want each person that reads this to see Justin’s story, my story, the story of these people we met that stepped in and helped in ways that we couldn’t even remotely have predicted, that great things can be accomplished only through the help of others. You’re not meant to be an island. Any dream worth dreaming is one you can’t achieve on your own. It’s not about an individual. It’s always about community, about coming together … If we could let down our guard and invite people in, we’re capable of achieving so much more, whether we’ve been given a story of a life in a wheelchair or we’re a single mother or a struggling businessman. Life is so much sweeter when we let people be a part of our story.”

(To listen to my full interview with Patrick Gray and Justin Skeesuck, click on the podcast link below):

Read more:
Pilgrimage to history: Family traces paths of forebears in the Church