It's no coincidence what Officer Federick Yap was praying shortly before all three calls came in.

Federick Yap was born and raised by his single mother in the Philippines, where he was baptized Catholic and attended Catholic school — but he never really considered himself very devout, nor did he have a lot of experience with praying the Rosary. But one memory from his youth has always lingered under the surface, even years later after he immigrated to the US in 1987.

And it took some 20 years for him to discover why.

Every day after school he’d go running. His route took him passed his Catholic high school, where he’d usually stop to get a drink from the water fountain. As it was usually the same time each day, he’d always see one of the nuns, Sister Sophia, walking the hallway praying the Rosary. He would say hello, they would talk a little, and he would return on his run. Not a big deal. He couldn’t say why, but he always felt “close” to Sister Sophia after witnessing that, day after day.

Fast forward to Reston, Virginia, where Yap is now a police officer for Fairfax County. One night early in his police career, Yap pulled into the lot of St. Thomas Church  to park his cruiser and write up his reports — only to find himself parked in front of a faded statuette of the Blessed Virgin. He decided to offer up a simple prayer in three parts: one Our Father, one Hail Mary, one Glory Be. The habit became routine, always ending with “I love you, Lord, I love you, Mama Mary.” Eventually he began to pray the entire Rosary.

Yesterday I was given this beautiful #rosary by a policeman I interviewed. Prayer has played a huge part in his work for the community- read more about it next week in the paper! pic.twitter.com/yVYlqPQ2F1

The power of three

Divine intervention often isn’t as dramatic and obvious as what is shown in movies; it usually happens subtly, quietly, and most often reveals itself only in hindsight — those without faith might even mistake it for coincidence or random luck.

It took Officer Yap many years to connect the dots over three separate incidents he faced while on the job. All three involved women in danger. And for him, it was no random coincidence.

The first incident was in 2011. The call was for a suicidal woman, according to an article in the Arlington Catholic Herald. When Yap and another officer arrived, they watched in shock as she drove her car into the Potomac River. Even though Yap wasn’t trained in water rescue, he and the other cop were able to get the woman out of the car to safety.

The second time was in 2015. Just starting his shift after the prayer, the call came in: a woman shot multiple times by her husband. A team of officers was able to get the injured woman out of the house safety, with Yap staying by her side, applying pressure to her wounds, all the way to the hospital, where she was treated and eventually recovered.

The third time was in 2016, according to the Arlington Catholic Herald report. He went to his prayer spot as usual, and when he finished he looked at the Holy Mother as her face appeared to convey to him, “I’ll see you later.” Shortly afterward, Yap responded to a call with another officer: a woman was in danger of harming herself. Arriving at her home, they approached the locked garage. Hearing two car engines running, they broke inside — finding the woman in her car, unconscious from the fumes. They opened the garage doors and dragged her from the vehicle. Yap swears that as he was administering CPR he saw the face of the Virgin Mother in front of him.

Significance of the statues

The theme of the “number three” came up in other various ways for Yap throughout the years, including in a trio of rosaries that were left on one of the statues at the church. But Yap did not connect the dots about his devotion and the three women he helped save until his work restoring a statue of the Blessed Mother.

As his devotion grew over the years, Yap took to repainting the faded statuettes of the Virgin surrounding the church in his spare time, even though he had no previous experience. But he didn’t make the connection between the Rosary, the three women he saved, and the statues until he was working on the third one. 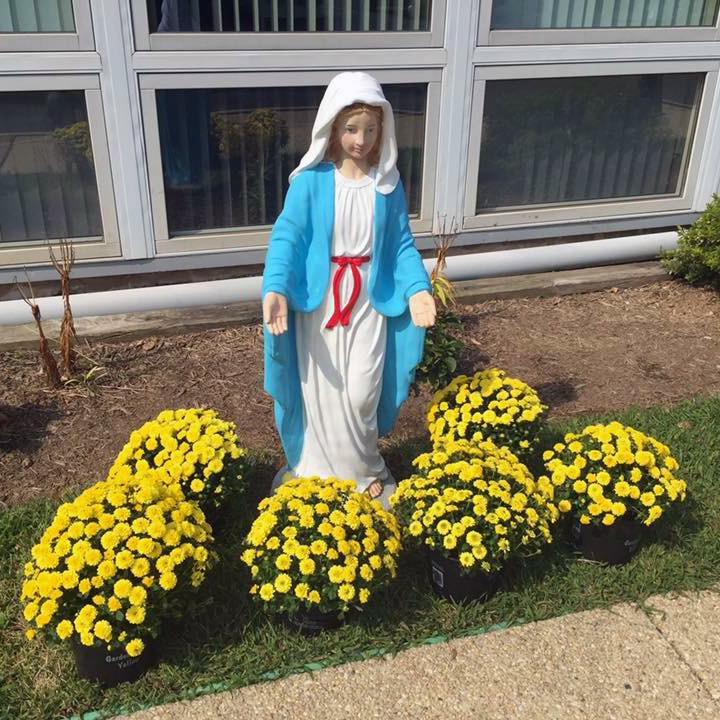 “Three statues, three women that I saved,” said Yap, who is married with two children, a college student and middle-schooler. “Wow, it reminded me that the Holy Mother is there to watch us. She’s reminding me about the beauty of what I did for those three women. ‘Look what you are doing,’ she seemed to say, ‘you are making me beautiful’!”

Yap feels so grateful for rediscovering the rosary again, in a much deeper and personal way, so many years after meeting Sister Sophia in the hallway. While not everyone might have the same experience with the Rosary as Yap, he feels that everyone could benefit from making this habit a part of their daily life, whether at work or home.

“Every day it gives me a better understanding about life, and it makes us kind,” he says. “We get the kind of energy that helps me to understand what ever we do, whatever we say, kindness and humility should be part of it.”

Read more:
Praying the Rosary is like eating chocolate … sort of