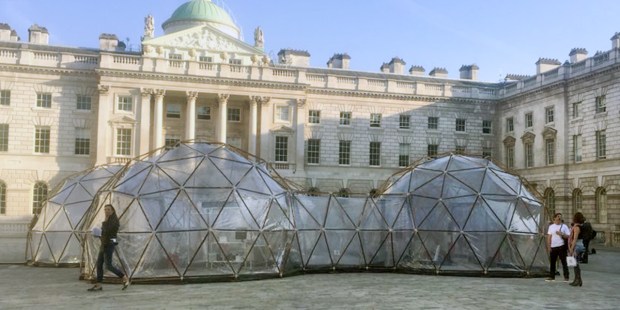 After visiting Tautra, Norway, with your nose, you might be inspired to change your own city.

We’re so accustomed to the air we breathe on a daily basis that pollution doesn’t always mean much more to us than an idea. That is, until we encounter the experience of breathing really clean air. Artist Michael Pinsky’s new Pollution Pods are making the contrast clear by inviting people to experience the air of five different cities.

The Pollution Pods simulate the air of London, New Delhi, Sao Paolo, Beijing, and Tautra. Beginning with the cleanest of the cities (Tautra, Norway), the participants move through clear tubes connecting each pod, breathing in the air of that city.

Pollution shortens the lives of the residents of London and New Delhi by 16 months and four years, respectively. The exhibit highlights the differences between these cities and the effect that we have on the air quality in the choices we make.

Pinsky’s artwork will hopefully draw increased attention to the quality of the air we breathe and what we can do to improve it.