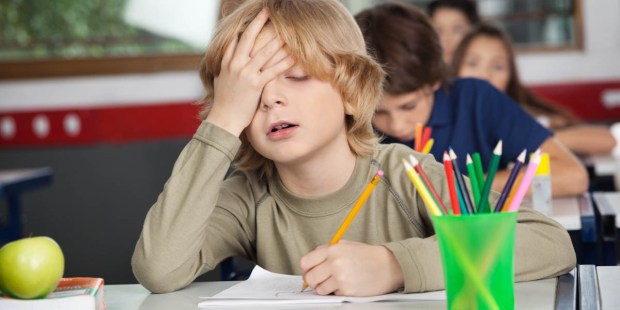 Teaching “reading comprehension” is pointless if kids don’t have the education they need to comprehend what they’re reading.

I will never forget when my oldest daughter was studying for her very first state-mandated standardized test. She was practicing reading comprehension questions — the kind where she was given a short paragraph to read and then questions to answer, questions that would supposedly test her ability to comprehend what she was reading.

She was doing fine until she got to her third question. I was in the kitchen making dinner when she asked for help, so I took a break and came around to the kitchen table.

The paragraph was about the invention and popularity of the game of jacks, and the question asked something like “where were jacks typically played.” The choices were on par with her comprehension level at the time, making the right answer fairly obvious. So I began to ask her leading questions like, “do you think kids would have played jacks in a swimming pool?” figuring she just needed a little push to eliminate the wrong answers.

So I was surprised when she said, “I don’t know.”

“Well, think about it. Is jacks a game you could play in the water?” I asked.

“I don’t know!!!” she repeated, getting frustrated.

“Sienna, just think about it. Think about whether it would even be possible to play jacks in water, ” I repeated.

She threw her head down into her arms and wailed, “I don’t knooooowwwww!”

“It’s not that hard, kiddo,” I said gently. “Could you scatter the jacks on top of the pool?”

“But jacks are things you do,” she wailed. “You can’t put them anywhere!”

This was moment when I realized how utterly ineffective reading comprehension tests are. Kids might be able to read and comprehend fine, but if they don’t have a grasp of basic facts the tests are predicated on, it will appear that they lack comprehension skills.

As The Atlantic pointed out recently, American schools’ gradual shift away from teaching information and toward teaching skills predicated upon the mastery of standardized testing is paradoxically leaving kids less equipped to pass those tests, in addition to short-changing their education as a whole.

Cognitive scientists have known for decades that simply mastering comprehension skills doesn’t ensure a young student will be able to apply them to whatever texts they’re confronted with on standardized tests and in their studies later in life.

One of those cognitive scientists spoke on the Tuesday panel: Daniel Willingham, a psychology professor at the University of Virginia who writes about the science behind reading comprehension. Willingham explained that whether or not readers understand a text depends far more on how much background knowledge and vocabulary they have relating to the topic than on how much they’ve practiced comprehension skills. That’s because writers leave out a lot of information that they assume readers will know … But if readers can’t supply the missing information, they have a hard time making sense of the text. If students arrive at high school without knowing who won the Civil War they’ll have a hard time understanding a textbook passage about Reconstruction.

Reading comprehension tests are supposedly formatted in such a way that the reader needs no other information than what is contained in the paragraph to answer the question, but that’s not how it works out in reality. So while the paragraph Sienna read explained how to play jacks, she couldn’t understand any of it because in her mind, jacks were jumping jacks. She had never seen a jack, and the paragraph didn’t explain what they were — it assumed the reader knew.

But if the reader doesn’t know, he or she will try and supply information makes the most sense and fit the rest of the questions around it. Sienna was trying to figure out where people would be most likely to do jumping jacks, and while “in the pool” wasn’t the best choice, it was a lot better than one of the other options — on the kitchen table.

Just imagine how many kids are bombing reading comprehension tests through no failure of comprehension, but through a simple (and easily fixable) lack of information. And instead of being given what they need to succeed next time, they’re repeatedly given disconnected sets of “readings” that do nothing to further the actual knowledge they need to comprehend.

We owe our kids better than this. It’s time to stop pretending that reading comprehension can be taught or tested in isolation from actual education. It’s time to stop laser-focusing on math and reading skills necessary for standardized tests and time to start remembering the whole wide world of education our kids will need to succeed in life. And above all, it’s time free students and teachers from the shackles of pointless, counterproductive, and ultimately damaging methods of standardized testing. Let the teachers teach, and let the students learn!

Read more:
Standardized testing is scaring our kids and ruining their education