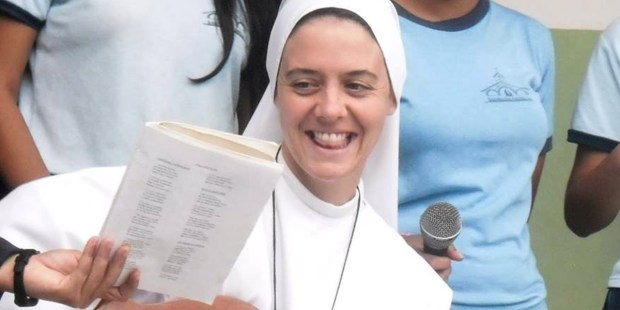 A documentary about Sr. Clare Crockett’s inspirational life is now available, with a trailer on the internet.

Just a little over two years ago, on April 16, 2016, Sr. Clare Crockett died after a 7.8 magnitude earthquake struck Ecuador, killing 480 people. The nun, who belonged to the Order of the Servant Sisters of the Home of the Mother, was playing guitar and singing in the main building of the Holy Family School, along with Sr Thérèse Ryan, who was injured in the disaster, and five young aspirants to the order. The earthquake left the four-story building in Playa Prieta in ruins, claiming the lives of Sr. Clare and the five postulants.

The death of the gregarious Sr. Clare deeply affected those who knew her. Her Order stated: “We discovered that her loss afflicted us, while her memory filled us with joy.” It became obvious that the 33-year-old had left a lasting impression on everyone she met; the Irish “livewire” was infectious with her energy, joy, and love of Jesus. Soon the Servant Sisters were inundated with messages revealing how Sr. Clare had helped them: “Strangers who spoke to us of conversions, vocations discovered or recovered, and special grace.”

As a result the Order decided to gather testimonies and stories relating to the life of Sr. Clare and make a documentary. In the trailer we get to see a young Clare with a passion for acting and to become famous. Then as she grew older she shared with great enthusiasm how “Jesus Christ stole my heart.” Her sister, Shauna Gill, told BBC Radio Foyle: “Clare was just your normal average teenager … It was a surprise, a big shock to everybody, when Clare said she was going away to be a nun.”

Yet, it’s no surprise that everybody loved her. In the little we see of her in the trailer, she resonates joy and such excitement for Christ, with a desire to share this love with everybody she meets. While people gravitated towards her, one participant in the documentary simply states: “She didn’t want them to come to her but to the Lord.”

The documentary shows how she was “one of the most unbelievable nuns” and her love for Christ encouraged others, with one young lady saying: “I owe a lot to her for the salvation of my soul.”

And now, on the two-year anniversary of her death, after a lot of work and dedication, the film is ready. Yet, in keeping with the true apostolic spirit of the Sister, the documentary, All or Nothing: Sr. Clare Crockett, will be distributed in “a form that is cost-free and apostolic.” While a few select screenings have already been organized, in order to arrange the viewing of the film in your parish, school, or even movie theater you just need to make a request on the Sr. Clare webpage.

You can watch the official trailer below:

Read more:
Why would a modern woman ever become a nun?