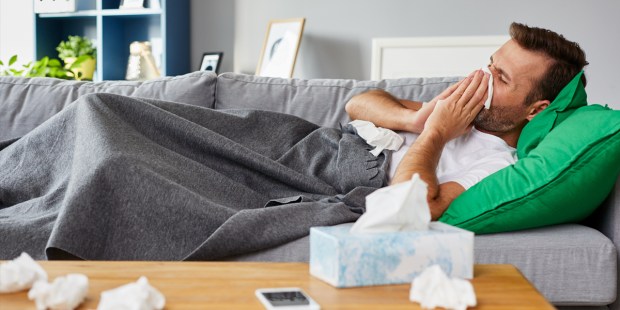 Studies show that men and women react differently to viruses.

We all know that everyone’s marriage is different, but there are some experiences so common that they seem to be nearly universal. One of these is the “man cold” — the way husbands tend to go down for the count when illness rears its ugly head, seemingly far more sick than their equally-sick wives. Kind of like this:

I’ll be honest, I always thought that men were kind of big crybabies when it came to getting sick. But an article at HealthyWay set me straight about the way men’s bodies react to viruses:

“It isn’t always the presence of the microbe or the presence of the virus that makes us sick,” said Sabra Klein, associate professor of molecular microbiology and immunology at Johns Hopkins Bloomberg School of Public Health, in an interview with Time. “It’s our immune response, and the research shows that males have a heightened response that summons cells to the site of infection, which contributes to the overall feeling of sickness.”

This totally makes sense to me. My sons get fevers way more often than my daughters — even when they all had the flu this year, only the boys spiked a fever.

Also, only the boys felt so horrible that they literally insisted on lying on or near me for 48 straight hours, until Tamiflu kicked in. The girls didn’t feel great, but they were at least able to sleep it off in their own beds.

I chalked up the difference to the girls being older, which probably has something to do with it — but the boys honestly seemed so much sicker, and now I know why.

The street goes both ways, though — all those jokes about women always being cold also have some truth behind them, since women have a higher core body temperature than men, making changes in temperature more noticeable. Women also have a lower metabolic rate than men, and male metabolic rate is one of the primary variables that indoor climate regulations are based on.

So the next time your husband (or son) goes to bed for a day with a bad case of the sniffles, don’t give him a hard time. Just make him some chicken soup and stock him up on tissues and sympathy, because they poor guy really does feel worse than you do.

Then go turn the A/C down, because it’s not just you — it really is cold in here!

Read more:
The alcoholic drink that can help you fight the flu