Why is this popular devotion called the “Rosary”? 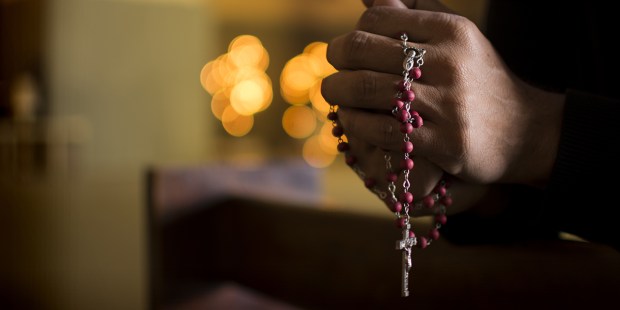 Here’s what the name Rosary comes from and why it is used in reference to a well-known devotion.

Most Catholics and many Christians know what the Rosary is. However, has anyone ever asked why it is called a “rosary”?

After initially looking at the English word, there is nothing immediately evident that would point to the Blessed Virgin Mary, or prayer in general. However, looking at the Latin roots of the word reveals a beautiful symbolism that isn’t widely known.

According to the Dictionary of English Etymology, from the Latin “Rosarium … signifying properly a collection or garland of roses, was a title of many works … consisting of compendiums of flowers as it were culled from preceding authors … In the course of time the name was specially appropriated to a string of Paternosters and Ave Marias to be recited in a certain order in honour of the fifteen mysteries of our Lord in which the Virgin was a partaker, and from the collection of prayers the name was transferred to the string of beads used for the purpose of keeping count in the recitation.”

Initially the Rosary was called “Our Lady’s Psalter,” referring to the 150 Psalms that monks would pray and from which the tradition of the Rosary originated. The Latin word rosarium became associated with the devotion over time, especially after the spreading of a particular legend.

According to the Catholic Encyclopedia, “An early legend which after travelling all over Europe penetrated even to Abyssinia connected this name with a story of Our Lady, who was seen to take rosebuds from the lips of a young monk when he was reciting Hail Marys and to weave them into a garland which she placed upon her head.”

Thus, the rosary became viewed spiritually and in art as a way to present a garland of roses to the Blessed Mother in a similar way that roses would be picked for a person’s earthly mother.

The name has stuck ever since, and the Rosary is the most popular Catholic devotion around the world.

Read more:
A beginner’s guide to praying the Rosary