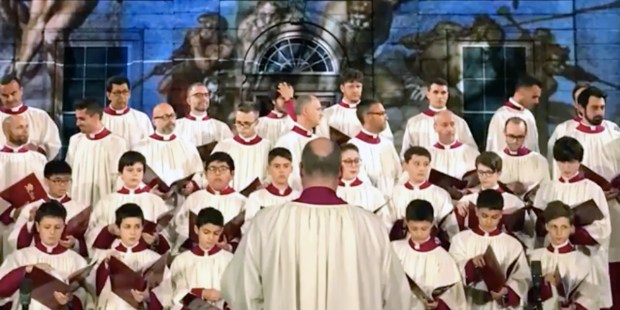 “They were as quiet and as attentive as they could be,” Cardinal Timothy Dolan said of the Met Gala’s guests.

The Sistine Chapel Choir, also known as The Pope’s Choir, has been mesmerizing audiences with its pure and celestial voices for 1500 years as the oldest active choir in the world, dating to the 6th century. While its audiences are usually the faithful — being the official ensemble for papal events and celebrations at the Vatican — earlier this week the 55-member choir took the stage in front of a less typical crowd: a star-studded group of business people, celebrities, and social movers and shakers attending the 2018 Met Gala at the Metropolitan Museum of Art in New York City.

The choir was invited to the fundraising event as part of this year’s theme: “Heavenly Bodies and the Catholic Imagination.” It was a historical event — not just because this was the first time the current choir has performed in the US, but because just like at every other performance, the audience was wowed by what they heard from the men and boys dressed in simple red and white robes.

While the event’s theme was approved by the Vatican, which also agreed to loan several of the fashion exhibits, the booking agent for the choir was reluctant at first, not knowing what to expect from the event and whether it was an appropriate venue for the choir to perform,  according to Crux.

The choir could not simply be background music to celebrities mulling around chatting and eating refreshments, as is usually the case with musical programs at the elaborate gala. The choir demanded a certain amount of deference and attention.

So out of respect for the choir, the event organizers chose to rearrange things so the ensemble could sing in between cocktails and dinner, demanding the crowd’s full attention. And it worked.

Anna Wintour, editor and chief of Vogue fashion magazine and the host of the event, tapped Dolan with not only introducing the choir but silencing the room.

Dolan told Crux in an interview that Wintour came up to him and said: “You’re the only one that can tell them to be quiet!”

“So, I told them out of respect for the sacred nature of the four selections here, we really want to cultivate an atmosphere of silence, and I’ll be darned, for 15 minutes they were as quiet and as attentive as they could be,” the cardinal said.

Here’s a snippet of what everyone saw and heard:

When discussing his concerns as well as his approach to bringing the choir to the New York event, John Hale, a member of the Board of Directors of the Vatican’s Patron of the Arts, said: “If we don’t go where we are invited, and maybe even where we are not invited, to communicate the message in the spirit of the apostle St. Paul, then we are going to be an increasingly small band of people who aren’t sharing God’s Love.”

Consisting of 20 professional singers from around the world, as well as 35 boys in its tenor section ranging in age from 9 to 13 who are selected after rigorous auditions, the choral ensemble is the official choir of all the papal celebrations at St. Peter’s Basilica and at the Sistine Chapel itself.

This year the choir announced its first US tour this summer, including stops at Radio City Music Hall and Microsoft Theater in L.A. See their website for tour dates and information if you’d like to experience its musical truth and beauty for yourself.