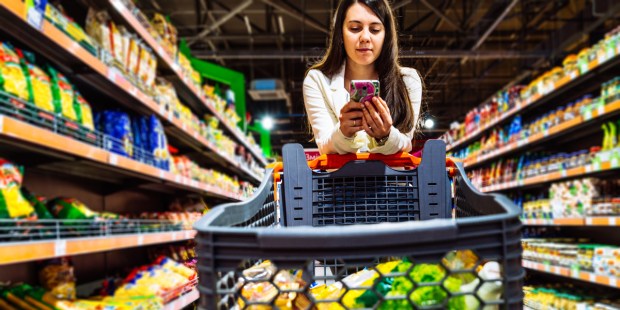 I have a confession to make: my name is Calah, and I am a textaholic.

Remember how not that long ago, I was waxing eloquent about how I was cutting down on my smartphone scrolling by putting my phone up in the kitchen cabinet? Yeah.

That was adorable, and adorably well-intentioned (if misguided).

Because the thing is, my life changed pretty radically after I wrote that. I got a job that requires instant communication and constant contact, and nothing I have ever done before has prepared me for setting boundaries that would fence that nonsense in.

So I didn’t fence it. And now, I live in my phone.

It sounds dramatic, but it’s kinda true. I didn’t realize how true it was until I was trying to check out at Target and have a conversation with the checkout girl (sanz eye contact, natch), while also carrying on a text conversation with a colleague. So I was baffled when the checkout girl responded to my (ostensibly normal) comment about my day with, “I’m not actually sure what a total transformation is but I can call management? If you want?”

Oh yes, I realized as I looked down at my phone. I had said the thing to the Target girl that I was trying to text, while simultaneously texting the thing to my team lead that I had been trying to say to the Target girl. So while she had no idea about the CG Fit enrollment window for Total Transformation, my team lead likewise had no idea why I was asking if her day had been slow or busy, given the rain.

That was the moment when I realized that I had become that person who basically isn’t a human so much as an automaton, so plugged into to the digital/virtual/instant world that I had forgotten about the actual world I was actually living in. And being so plugged into your phone that you ignore real, human interaction is apparently one of the seven things that make a person highly unlikeable, which I totally believe is true:

There’s nothing people dislike more than someone who feels the need to constantly make every conversation about themselves — how great they are, what a wonderful job they did, why they should be singled out for special recognition by management. It’s egotistical, selfish, and uncaring to make every single statement about you. Focus on others instead …

Unless you’re trying to deal with a family or work emergency or crisis, it’s super rude to be on your phone while trying to spend quality time with someone else. Save the scrolling for when you’re alone if you want to be likable.

Did you catch what I did there? You thought I was going to quote a section about being on the phone, and I did … but not until after I quoted a section on egotism.

I’m coming to realize that they’re one and the same. Not that effectively conducting business is egotistic — I’m not saying that by a long shot. What I am saying is that, particularly for a mother of five who’s spent the last years answering the dulcet cries of “Mommy! Mommy! Please come wipe me!” there’s something siren-like about being needed for real, adult problems that involve neither Legos nor poop.

Which isn’t to say that business is bad, or being a working mom is bad, or even that using technology effectively and efficiently is bad. Rather, what’s bad is the adrenaline rush that comes with constant connectivity. It can (and does) lure people into thinking they’re working hard (or working at all), when in fact what they’re doing is chasing that next high of social recognition or socially measurable achievement.

And by they, I mean me. It’s a bitter pill to swallow, but not that bitter. In a way, it’s kind of freeing to recognize that not all this extra work, this constant hustle and grind, is worth everything … or even worth anything. What’s worth more are my kids, my family, and the checkout girl at Target who just wanted to tell me how her day was.

Those are the people — and the connections — that matter.

Read more:
How to have a healthier relationship with your smartphone