The Catholic history of the graduate’s cap and gown 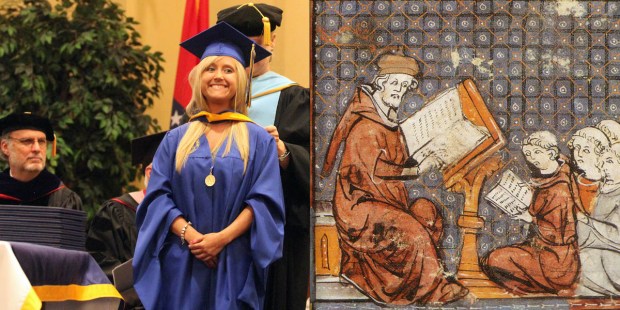 The academic regalia seen at commencement ceremonies today dates back to the medieval universities of the 12th century.

‘Tis the season when college and high school graduates everywhere don caps and gowns and march with great solemnity across a stage to receive their diplomas (from the Greek word meaning “paper folded double”), which are often written in Latin whether or not the graduating senior ever studied that ancient language.

Why all the pomp and circumstance?

At a time when tradition seems to have fallen by the wayside, either out of a craving for authenticity or simply a desire for comfort (e.g., the men’s necktie appears to be an endangered species), the annual fuss of the commencement ceremony is still going strong.

Today’s academic regalia has its roots in medieval Europe, when universities were just beginning. With the growth of cities in the 12th and 13th centuries, the demand for professional clergy increased. Catholic bishops established cathedral schools to train these clerics, which later evolved into universities.

At that time, a scholar would have taken religious orders, and would have worn the long gown and hood that made the cold stone buildings of medieval colleges a bit more habitable.

Eugene Sullivan, in his article “An Academic Costume Code and an Academic Ceremony Guide,” traces the history of the academic gown back to the early European university. These gowns were not just for ceremony, though – they were worn at all times:

A statute of the University of Coimbra in 1321 required that all “Doctors, Licentiates, and Bachelors” wear gowns. In England, in the second half of the 14th century, the statutes of certain colleges forbade “excess in apparel” and prescribed the wearing of a long gown. In the days of Henry VIII of England, Oxford and Cambridge first began prescribing a definite academic dress and made it a matter of university control even to the extent of its minor details.

(A bit of trivia: Even today, the students of the University of Coimbra wear academic gowns over their clothing, every day. Tourists exclaim that the grounds around the university look like Harry Potter’s Hogwarts.)

The square cap or mortarboard worn by graduates also has Catholic antecedents. It is believed to have its roots in the biretta, the square cap worn by Catholic clergy.

The graduation cap and gown keeps alive the tradition of the great medieval Catholic universities, even if underneath those austere gowns, today’s grads can often be seen in casual flip-flops and Bermuda shorts.

While it may seem incongruous, and even a bit phony, as with other traditions, the cap and gown serves to remind us what generations before us treasured, and perhaps spur us to protect that good. College development offices owe much to academic regalia, and other traditions like the alma mater, for making today’s graduates into tomorrow’s donors.