A lesson from Mary: How being OK with your neediness can put you in the best position to serve 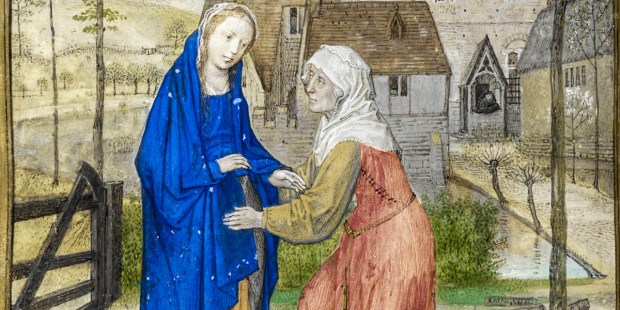 The Visitation, like the Rosary and the Bible, can never run out of things to teach us …

I’ve always been amazed by the little old ladies praying the Rosary before Mass, clinging to their beads like they hadn’t meditated on the same mysteries twice a week for their whole lives. How much more can there be to contemplate? But the Rosary is essentially a Bible study, and the Bible is inexhaustible.

It’s a river, “broad and deep,” says St. Gregory the Great, “shallow enough here for the lamb to go wading, but deep enough there for the elephant to swim.”

You could pray the same mysteries every day for 80 years and the Spirit could still give you new insights.

The Visitation (whose feast we celebrate on May 31) is one mystery through which God has spoken to me in so many ways. I vividly remember walking the quarter mile from my parking spot in high school, thinking about how my girlfriends Abby and Adele were Elizabeth to me, thanking God for their support. A few years later, after I read Scott Hahn’s Hail, Holy Queen, this mystery always evoked the image of Mary as Ark of the Covenant. Once I read Frank Sheed’s inimitable To Know Christ Jesus, I couldn’t help but see Mary as the Warrior Queen, greeted as “blessed among women” as Judith and Jael were (Jdt 13:18, Jgs 5:24).

But the last six years on the road as a hobo missionary have colored the way I see the Visitation now. Mary was tired and apprehensive, traveling up into the hill country after receiving the joyful but jarring news that she would be the mother of the Messiah, the mother of God. Her knowledge of the Scriptures had begun to show her that her Son would suffer and die at the hands of his people, for the sins of his people. She was on her way to see the only person in the world who might understand: her cousin Elizabeth, who had miraculously conceived a child as well.

Even this might have made Mary nervous. After all, Elizabeth lived near Jerusalem, was the wife of a priest and was significantly older than her young country cousin. Elizabeth outranked Mary in every way, and Mary must have wondered what sort of reception she would be given. But Elizabeth was old and in need of help, and Mary was young and in need of guidance. So off she went, hopeful that Elizabeth would believe her story about the angel, hopeful that she would find a friend.

Mary went to Elizabeth out of generosity, but also out of need. She needed someone to walk this road with her, at least for a bit. But when Elizabeth cried out to her young cousin, calling her “the Mother of my Lord,” a title reserved to the Queen Mother and not heard in Israel for centuries, Mary began to realize that her need for companionship was given her so that she would bring Jesus to Elizabeth and to John.

John leaped in his mother’s womb because he was encountering Jesus. Elizabeth praised God through the Holy Spirit. And Mary spoke words so beautiful they’re recited every day by millions of people. Mary had brought Jesus to her cousins, but in doing so, she had been touched by God as well. In her need she had been generous; in her generosity, she had been fed.

This is the Christian life. We who serve are also being served, sometimes by the very people who feel themselves indebted to us. We who have complicated needs are also being Christ to those who make sacrifices for us. We bring Jesus to each other, but only when we’re willing to be needy and messy, to move out of the framework that separates people based on economics or race or spirituality.

Today, you will have the opportunity to be Mary to somebody, to bring somebody Jesus. It might seem that you’re just dropping off a meal or chatting in the parking lot or even tipping the pizza delivery guy, but every encounter that we have with another human being is a chance to bring Jesus to her, even if just by the way we love her.

Today, you will have the opportunity to be Elizabeth. You can let somebody be Jesus to you. You can speak God’s truth to him, that he is loved and wanted.

If we frame every encounter as though it’s the Visitation, if we recognize that every person we interact with needs Jesus, we can be Mary to her. If we allow ourselves to be served, we can be Elizabeth. Mary’s time with Elizabeth could just have been an unremarkable encounter between cousins who felt slightly uncomfortable around each other, but these women went in with their hearts open and the world was forever changed. Let’s have relationships like that.

Read more:
How praying the Creed is like sharing a friendship charm with God