EXCLUSIVE PHOTOS: A rare look at how the Little Sisters of the Poor serve in the shadow of the Navajo Nation

Incredible images reflect the Sisters’ mission of humble service: “welcoming the elderly as we would Jesus Christ himself"

A slowly building breeze gently sweeps across the high plains, giving rise to a ghostlike dust cloud obscuring where Rt. 66 meets the horizon, while tumbleweeds gleefully bounce along the well-worn pavement like a group of playful children. Nestled midway between the Continental Divide and the Arizona border is the small city of Gallup, affectionately known as the “The Indian Capital of the World” as it lies in the embrace of the Navajo, Zuni, and Hopi lands that surround it. Its sculpted landscape is carved out by time; wind and water form jutting mesas, tangled canyons, and unending plains that are haunted by whispering winds and distant train whistles painting the very portrait of what is “The West.”

In the 1930s and ‘40s a romance began. Gallup became the backdrop for a slew of Western movies, drawing stars such as John Wayne, Ronald Reagan, Katherine Hepburn, Humphrey Bogart and scores of others. The El Rancho hotel, located in the center of town became the Beverly Wilshire of New Mexico, hosting hundreds of actors, actresses and directors. And the 49er Lounge holds the unique claim of serving both Errol Flynn and his horse, as the two rode right into the establishment one summer afternoon.

Unfortunately, like many a Hollywood romance, it wasn’t to last, and by the 1950s Gallup’s stellar movie career rode off into the sunset as the specter of fiscal woes rode in.

See the story in pictures! 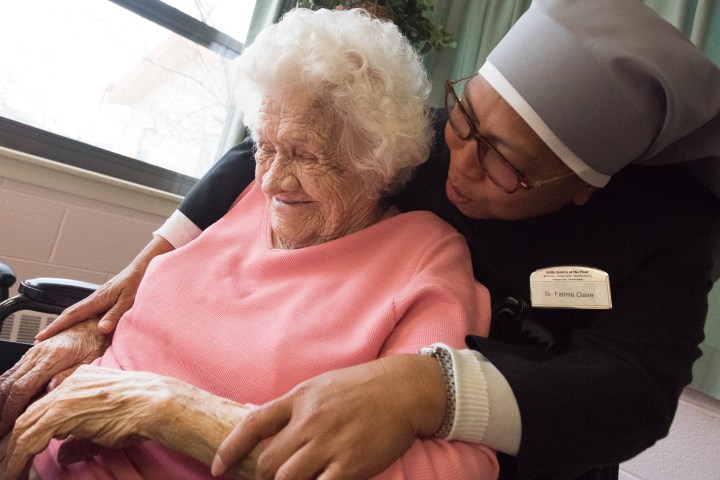 In the decades that followed, the poverty level climbed due to a lack of economic development further fueled by the closure of several major mines. Economic woes contributed to Gallup’s becoming the most violent city in New Mexico, with a crime rate that was nearly five times the national average in 2012 [1].

In 1983, responding to the poverty that was disproportionately affecting the elderly poor within the Diocese of Gallup, Bishop Jerome Hastrich reached out to the Little Sisters of the Poor, a religious congregation founded by St. Jeanne Jugan in Paris in the mid 1800s whose mission is to care for the neediest elderly poor. The Sisters enthusiastically responded, and on December 11, 1983, the eve of the Feast of Our Lady of Guadalupe, the first group of Sisters arrived.

They began serving their first residents in an old church building in January 1984, while undertaking construction of their permanent home, Villa Guadalupe. And by early 1989, amidst great fanfare and celebration, the doors were opened to the Villa Guadalupe Home for the Elderly Poor, which is now home to more than 50 elderly Native Americans, Hispanics and others. [2]

The Sisters, volunteers and residents constitute a large, diverse family with a loving warmth that can be felt from the moment the front door is opened and you’re greeted by Maxi, the little Jack Russell terrier that “protects” the home, along with the curious resident cat.

Villa Guadalupe sits high atop a bluff overlooking downtown Gallup, with the unintentional symbolism of being nearer to heaven, complete with its angels … and in mysterious ways it’s more than just symbolic.

The Sisters’ mission is that of humble service, “welcoming the elderly as we would Jesus Christ himself and serving them with love and respect until God calls them home.” As explained by Mother Rosario; when someone’s health is in decline and they approach the end of their earthly life, the Sisters go into vigil, never leaving their side — in 4 hour shifts, 24 hours a day, taking turns at their bedside, praying, caring and comforting them right up to their final breath. “We want our face to be the last thing that they see, as they pass from this life to the next, where they will open their eyes again and gaze on the face of Jesus.”

It’s a comfort to know that wherever there is poverty and suffering, Grace abounds. From the South Bronx to Calcutta, Christ’s Presence can always be found in the heart of the poor. The Little Sisters of the Poor steadfastly walk with those in the twilight of life as they prepare for the ultimate journey, often providing a level of care, dignity and comfort far beyond what the residents experienced in life. So, while the Sisters may be known as the angels of Villa Guadalupe, perhaps more than that, they are the angels at Heaven’s gate.

“When you hold a banquet, invite the poor, the crippled, the lame, the blind; blessed indeed will you be because of their inability to repay you. For you will be repaid at the resurrection of the righteous.”