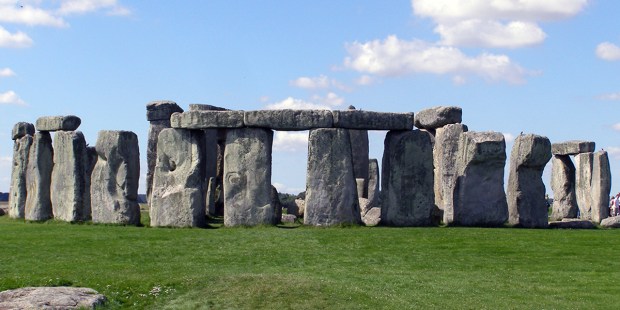 New technology and know-how suggests that the builders of Stonehenge were Welsh.

A breakthrough study using modern technology claims to have identified the builders of England’s most mysterious monument. Previous examinations of the stone circle in Wiltshire have focused on the massive bluestone pillars, but it was in the remains buried at the site that experts found evidence that suggests the builders may have been Welsh.

The 25 cremated remains were first discovered by Colonel William Hawley in the 1920s. Hawley’s team excavated them from 56 pits that dot the inner circumference and ditch of the monument. These pits are also known as Aubrey Holes. Hawley lacked the means to examine the remains further and reburied them for later study, which has commenced now, nearly 100 years later.

The new study of these remains has identified the regions from which they came. Fox News reports:

A groundbreaking new analysis of the 25 cremated remains buried at the prehistoric monument in Wiltshire has revealed that 10 of them lived nowhere near the bluestones.

Instead they came from western Britain, and half of those 10 possibly came from 140 miles away in Southwest Wales (where the earliest Stonehenge monoliths have also been traced back to).

The remaining 15 could be locals from the Wiltshire area or other descendants of migrants from the west.

The study notes that these were most likely a mix of men and women, all of high social standing. It is unknown if the individuals died shortly before interment at Stonehenge, or if their descendants brought their bones back to Stonehenge several generations later. The oldest bones were dated to around 3,000 BC, and the rest follow in a 500-year span.

Lead author of the study John Pouncett said: “The range of dates raises the possibility that for centuries people could have been brought to Stonehenge for burial with the stones.”

The team of scientists, led by researchers from Oxford, cannot say for certain that these were the actual builders of Stonehenge, but in dating the remains they found the earliest cremation date to coincide with the first bluestones that make up the inner circle.

The study, published in Scientific Reports, found that people and materials were transported between Wiltshire and Pembrokeshire, nearly 100 miles away. Some of these people, it says, decided to settle in Wiltshire.

The key breakthrough came when researchers recognized that cremation at extreme temperatures can crystalize a skull and store the chemical signature of its origins. Co-author Dr. Christophe Snoeck demonstrated that cremated bones can retain their strontium isotope composition. He said that “about 40 percent of the cremated individuals did not spend their later lives on the Wessex chalk where their remains were found.”

Pouncett concluded: “The cremated remains from the enigmatic Aubrey Holes and updated mapping of the biosphere suggest that people from the Preseli Mountains not only supplied the bluestones used to build the stone circle but moved with the stones and were buried there too.”