This mural of St. Mungo as a breastfeeding baby is bringing life to Glasgow 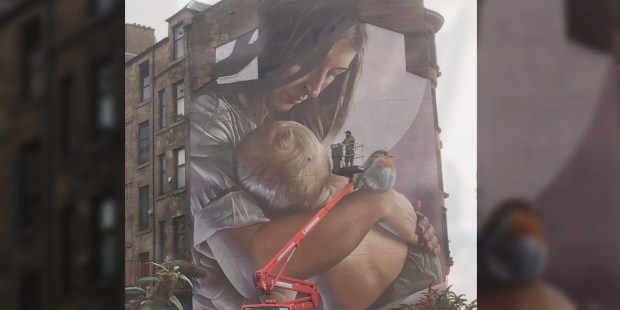 An Australian graffiti artist finished the amazing project in just one week.

Over the course of a week, Australian artist Sam Bates (known as Smug) has transformed an empty wall in Glasgow city center, to the delight of residents, with a mural of Glasgow-founder St. Mungo and his mother.

According to legend, the mother of St. Mungo, whom some versions call St. Enoch and others Teneu, was cast out of her home by her father after becoming pregnant, and her son St. Mungo would go on to found the cathedral in Glasgow. The robin depicted perched in the mural represents a miracle supposedly performed by St. Mungo in which he restored life to St. Serf’s robin.

Many are praising the artist for the life it brings to the High Street, while some women are even praising him for the depiction of a mother breastfeeding, as they hope the display of this image will help to normalize breastfeeding for mothers.

Read more:
A letter of encouragement to all breastfeeding mothers