How to help your introverted child handle emotional stress 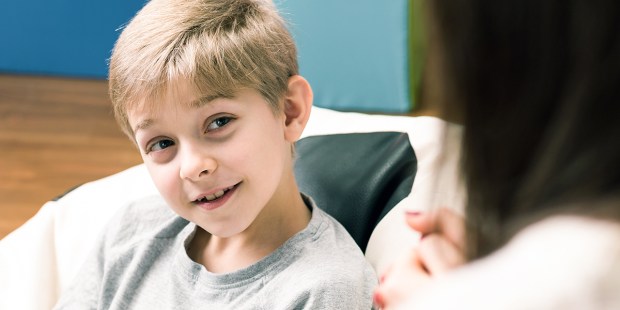 Labeling emotions is a powerful tool, but you need to do this first …

My 8-year-old son, Liam, is very introverted. He plays exceptionally well alone — in fact, he needs time alone in the same way that I need social interaction. Without it I get moody, depressed, and anxious. Without some alone time Liam gets the same way.

And yet, being such an introverted kid comes with some drawbacks. He doesn’t naturally talk about his emotions or his struggles … instead, he tends to keep everything bottled up inside. But those emotions and struggles don’t go away — they just sit there, clouding his thoughts. After a while the strain of it manifests in some way — irritation, unprompted anger, and in rare times he begins to develop compulsive habits like picking the dry skin from his lips or wringing his hands nonstop.

A few years ago I spent several months in therapy, learning techniques to help me manage anxiety and postpartum depression. The single most effective way I learned to calm overwhelming emotional distress was to label and validate my own emotions. According to Business Insider, labeling emotions is so effective at calming our brains that FBI hostage negotiators use it as a primary tool.

Suppressing emotions doesn’t work and can backfire on you. Via Your Brain at Work: Strategies for Overcoming Distraction, Regaining Focus, and Working Smarter All Day Long,  “[researchers] found that people who tried to suppress a negative emotional experience failed to do so. While they thought they looked fine outwardly, inwardly their limbic system was just as aroused as without suppression, and in some cases, even more aroused.” Kevin Ochsner, at Columbia, repeated these findings using an MRI. Trying not to feel something doesn’t work, and in some cases even backfires. But labeling, on the other hand, makes a big difference.

To reduce arousal, you need to use just a few words to describe an emotion, and ideally use symbolic language, which means using indirect metaphors, metrics, and simplifications of your experience. This requires you to activate your prefrontal cortex, which reduces the arousal in the limbic system. Here’s the bottom line: describe an emotion in just a word or two, and it helps reduce the emotion … In fact, labeling affects the brain so powerfully it works with other people, too. Labeling emotions is one of the primary tools used by FBI hostage negotiators.

But the other thing I learned in therapy was that waiting until my emotional distress has reached Defcon-level before I label and validate is not optimal … and sometimes it can be too late. Instead, I gradually taught myself to do emotional health-checks throughout the day. If I started listening to sad songs and staring out the window inexplicably, I stopped myself and had a little conversation about how I was feeling and why. If I realized my shoulders were tense and my jaw was clenched, I learned to step away from whatever was in front of me and figure out what was ratcheting up my stress level. It took several months of intentionally doing this before it became automatic — now I don’t even have to remind myself to do these things.

For a long time I operated in a damage-control mode with Liam as well. I didn’t make a point of spending time with him, either in silence or in conversation, until it became clear that he was upset, stressed, or anxious. And while I did begin using the tools I learned in therapy to help my kids learn to manage their emotions, usually when he was emotionally overwhelmed he couldn’t get the mental space to label his emotions, much less examine where they came from.

In the past year I’ve made a habit of spending some time with Liam every day. I don’t always talk to him, and it’s not always obvious — sometimes I just find a task to do in the same room where he is playing for a while. I might ask him a question about his Pokémon battle or his school day, and he might get up and help me with the chore I’m doing. A few days a week we end up having a conversation about how he’s feeling or how his schoolwork is going. Every once in a while he will really open up to me, but not usually.

However, what he has started doing is coming to tell me when he feels upset. I no longer have to struggle to get him to open up and label his emotions — he does it voluntarily. And the outbursts and irritation have noticeably diminished. He is visibly calmer and happier.

So if you have an internal child (or spouse, or friend), helping them label and validate their emotions is a powerful and effective tool — but it’s likely one you’ll only be able to help them use once you’ve established daily rituals of giving them your time and attention.

Read more:
A psychologist’s advice for how to talk with teens