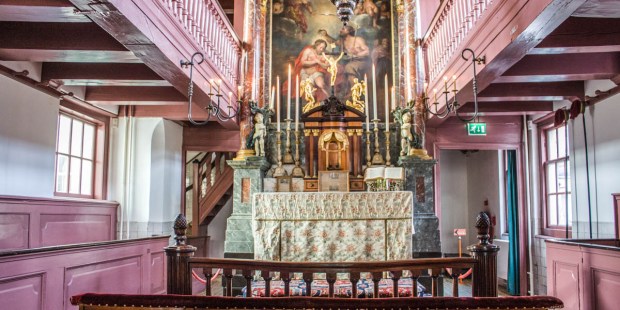 “Our Dear Lord in the Attic” church was built to serve persecuted Catholics.

One of the oldest continuously operating churches in the Netherlands is hidden away in an attic not far from Amsterdam’s infamous red-light district.

The story of how the chapel came to be starts with Jan Hartman, a German Catholic living in Amsterdam during the Reformation.

During the 17th century, Hartman, like all Catholics, was prevented from exercising his faith in public following the rebellion of the majority-Protestant Low Countries, encompassing parts of modern-day Belgium and the Netherlands, against the Catholic king Philip II of Spain. This led to hostility towards Catholics in the Dutch capital. All Catholic churches were turned into Protestant ones, and many Catholics fled the city to pursue their religious freedom.

But instead of fleeing, Hartman came up with an innovative solution to continue practicing his faith. He brought the two properties on each side of his own home and turned the attic in one of them, at Number 40, Oudezijds Voorburgwal, right near the infamous red light district, into a secret Catholic church. Fellow Catholics could access the “schuilkerk” (literally “clandestine church”) through a spiral staircase hidden behind a fake door in the living room. They would often resort to code language to share news about Mass and other services. F or instance saying “I am going to the parrot” was a way to say that Mass was going to be celebrated.

The narrow steps of the staircase led to the organ at the back of a two-story chapel, which featured a pull-out pulpit built into the wall on the left-hand side of the altar. As many as 150 people could be fitted into the chapel for Mass, making it a precious resource for the persecuted Catholic population of Reformation-era Amsterdam.

Today, it’s possible to visit the chapel, known as “Ons’ Lieve Heer op Solder” (literally, “Our Dear Lord in the Attic”), to admire its secrecy-design as well as the the original 17th-century decorations, including a painting of the Baptism of Christ by Jacob de Wit. The museum encompasses the whole house, including original 17th-century Dutch furniture on the remaining floors.

But the chapel is more than just a museum: Mass is still celebrated in the “clandestine church,” making it one of the oldest continually operating churches in Amsterdam.