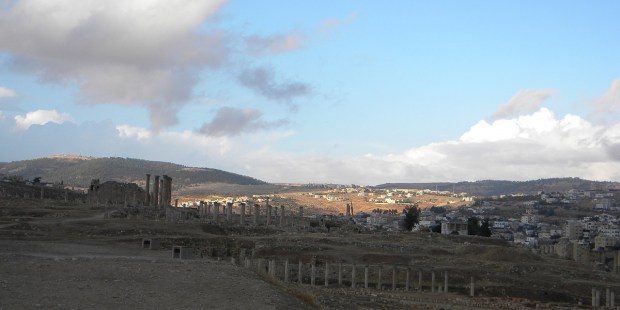 Archaeologists try to trace the footsteps of ancient Israelites as they fled from Egypt.

The story of the Israelites leaving Egypt covers much of the Pentateuch (the first 5 books of the Old Testament), yet scant archaeological evidence of this great escape has led experts to question its authenticity. It has long been the believed that the Israelites were actually native to Canaan — an ancient region encompassing much of modern-day Israel.

Now, however, these assumptions are being called into question, as new analysis of ruins near the River Jordan could be proof of a nomadic Israelite society crossing into the land from the outside.

At the ruins, named Khirbet el Mastarah, archaeological digs have revealed the remains of pottery dated to the Early Iron Age, a time traditionally associated with the Israelites’ flight from Egypt. These artifacts were discovered outside a number of low stone walls, believed to be rudimentary stone fencing for animals.

Dr David Ben-Shlomo and his American dig partner, Ralph Hawkins of Averett University, are leading the effort at Khirbet el Mastarah. They believe this could be the first record of this biblical account to ever be discovered. Ben-Shlomo said:

“We have not proved that these camps are from the period of the early Israelites, but it is possible. If they are, this might fit the biblical story of the Israelites coming from east of the Jordan River, then crossing the Jordan and entering into the hill country of Israel later.”

At the site, the team observed clear signs that there was once a settlement in the area. They identified the low stone walls as animal fencing from what they know of the settlement practices of Bedouins — nomadic Arabs of the Middle-Eastern Deserts — who lived in tents made of perishable materials and would not have needed the stone walls. The team concluded, “the structures might have housed animals, rather than people, who lived in tents around them.”

More evidence comes from the camp’s secluded location. That they hid their camp in the hills suggests the residents of Khirbet el Mastarah feared hostilities from locals as they entered a new land. Dr Ben-Shlomo said:

“Sites like Khirbet el Mastarah and other similar ones in the Jordan Valley seem – at least from survey material – to appear suddenly during the Iron Age,

“Since this area is not densely populated in many periods, this might indicate a new phenomenon like nomads suddenly creating settlements, or a new population.”

Soil samples are currently undergoing tests to confirm the theorized dates set by Ben-Shlomo’s team, but results are not expected for a few months.

In the mean time, the archaeological team is preparing to excavate the nearby site of Uja el-Foqa, to determine if it has any links to Israelite settlement in the region. Unfortunately, they say this task may be difficult due to cultural similarities between the Israelites and those who lived in the area before Exodus:

“It is difficult since many aspects of the material culture of different groups (say those from east or west of the Jordan River) may be too similar or not indicative enough,” said Dr Ben-Shlomo.